[NOTE: I originally wrote this blog post on Friday, 10/12/12, and posted it. Then I went back in to edit a typo and technical difficulties resulted in the post being erased. So, although I tried to recreate it, this is a different version than the original unrecoverable posting.]

On Thursday night, October 11, 2012, I watched the one and only Vice-Presidential debate on C-Span. I did not want to hear pundits spin things before, during or immediately after the event. It took place in Danville, Kentucky, home to Centre College and bluegrass.

The two participants, Democrat Joe Biden and Republican Paul Ryan had enormous pressure on them, as each tried to make the case his "number one." Biden was trying to make up for what Obama lacked in his first debate appearance against Romney. Ryan on the other hand was trying to maintain the momentum that Romney had gained in his unanimously-declared victory over Obama the week before. 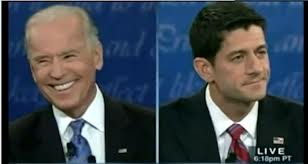 From the first moments of the debate, it became clear that this would not be like the Presidential debate the previous week. Biden and Ryan were seated rather than standing. And whereas Obama came across as distant and lethargic when he faced off with Romney, Biden was the opposite. He grabbed the bullsh*t by the horns and interjected himself into every phase of the 90-minute process. C-Span, like other networks, showed a split screen throughout the debate, so you could see both the candidate who was speaking as well as the other one waiting his turn. This was the same thing that took place in the first Presidential debate, so it was not a surprise to the candidates or the viewers.

It was this split screen which, much like the Obama-Romney debate the week before, told the story. The substantive part of the debate has been completely overshadowed by Biden's demeanor throughout the debate. It was not really even a debate by debate standards. Instead, it was the Let-me-talk-over-my-'friend'-whenever-I-please Joe Biden show. The moderator, Martha Raddatz of ABC News, let Biden interrupt Ryan 82 times. No, that's not a typo. Biden interrupted 82 times. And Raddatz herself interrupted Ryan 9 times. Raddatz's role as moderator was challenged prior to the debate since Obama attended her first wedding to a Harvard Law School classmate in 1992. Raddatz has also been a guest, reportedly in a professional context, at the home of Joe Biden since he became vice president. 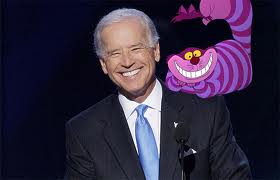 The most distracting thing to me during the debate was Biden's senseless, arrogant laughter at the most inappropriate times. His molar-baring grin covered the lower half of his face much of the time and was creepy, to say the lease. I was reminded of the grinning Cheshire Cat from Alice's Adventures in Wonderland.

Once again the haunting photo from a news story a month or so ago came back to me when Biden was photographed with a creepy, ear-to-ear grin on his face as an unknown biker chick sat on his lap and two rough-looking male bikers sat on either side of them. Biden was like a creepy old mafioso in a movie who smiles and hams it up, puts his arm around the younger guy as if to encourage him, then takes him out the back door to the alley and puts a bullet through his brain. Disturbing, to say the least. 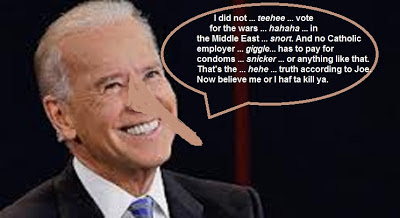 As disturbing and distracting as Biden's physical demeanor and actions were, I have to wonder if he was pumped up on drugs or merely adrenaline. Whatever the reason, and however badly the procedural aspect of the debate was handled, nothing can excuse the substantive lies that Biden told. Two particular lies are so egregious that I have to highlight them.


First, Biden tried to blame both the Iraq war and the Afghanistan war on Paul Ryan. He said that Ryan and other Republicans voted to put two wars on a credit card, and that he himself voted against the wars. The next day the falsity of that statement was made known and that blatant lie by Biden was exposed. He voted FOR both wars while he was in the Senate. According to the Free Beacon:


Vice President Joe Biden accused Rep. Paul Ryan of putting two wars on the “credit card,” and then suggested he voted against the wars in Afghanistan and Iraq.

“By the way, they talk about this great recession like it fell out of the sky–like, ‘Oh my goodness, where did it come from?’” Biden said. “It came from this man voting to put two wars on a credit card, [...].”

“I was there, I voted against them,” Biden continued. “I said, no, we can’t afford that.”
Then Sen. Biden voted for the Afghanistan resolution on Sept. 14, 2001 which authorized “the use of United States Armed Forces against those responsible for the recent attacks launched against the United States.”

And on Oct. 11, 2002, Biden voted for a resolution authorizing unilateral military action in Iraq, according to the Washington Post.

So, Pinocchijoe's nose is growing as much as that of Pinocchiobama.

But Joe did not stop there. The other lie that I must note is that Biden said the HHS mandate will not affect Catholic employers. This lie has been clearly debunked. Here is an excerpt from a Heritage Foundation article:

That is actually false.

The real “fact” about the anti-conscience mandate is that it applies to almost all employers—including many religious organizations such as hospitals and social service providers. It requires them to provide coverage that pays for abortion drugs, contraception, and sterilization regardless of moral or religious objections. 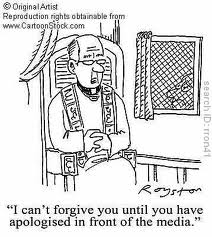 Much has been written in the last year about the HHS mandate and how it will NOT excuse most religious employers from the mandate. Biden is either knowingly lying about the effects, or he is uninformed. Either explanation is inexcusable and reprehensible for the Vice President of the United States, especially when he then sits in front of nearly 50,000,000 and tells untruths with such force and false assurance. It's time for Joe to go to Confession and say, "Mea culpa, mea culpa, mea maxima culpa." But I doubt he would mean it.


We have less than a month to go now before we go to the polls and vote for the future of this country, and the world. Obama and Biden can out whatever spin on their impending loss that they want. The American people hunger for the truth. We hunger for our leaders to stop telling us what they think will get them re-elected so they can continue to line their pockets and those of their benefactors as Biden and Obama have done for the last five years.

So, after the one and only Veep debate, I commend Paul Ryan for maintaining a cool and poised exterior in the face of clownish behavior by a nearly 70 year-old man.

And I renew my tribute to Joe Biden. Obama may yet wish that he had not stood by(den) his man.