You may recall this hidden video recording of Joe Biden from 6 years ago. It surfaced during the 2008 presidential campaign and was one of the first instances where the media dismissed Biden's gaffe as just Joe-being-Joe. Now such gaffes and dismissals are practically a daily occurrence.


Some employees of 7-11 were offended by Biden's prejudicial remark, and rightfully so. But it seems Biden has rubbed off on Obama, as he has now been dubbed the "7-11 President." 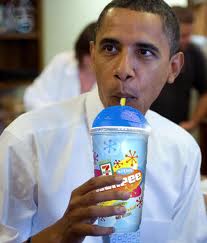 
I wonder if Barack and Michelle ran their household that way in Chicago. And will they revert to that lifestyle when they return to Chicago (or Hawaii) when we oust them in 2 1/2 weeks?