Teddy Wins - What a Let-Down

There is a tradition in every Washington Nationals home baseball game. It it the Race of the Presidents. It’s a fun thing to watch as the four big-headed presidents leave the bullpen area and run along the stands to toward the Nats’ dugout. The four presidents are the ones on Mount Rushmore: 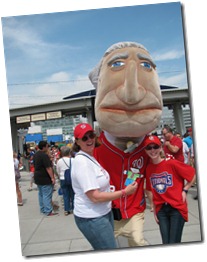 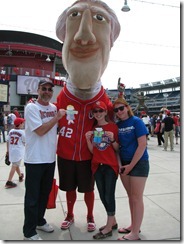 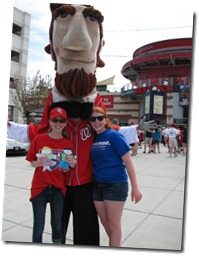 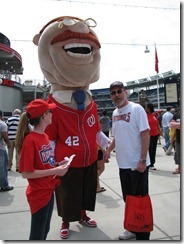 In all the years of racing, Teddy has never won. It is one of those things that began innocently, but over the years it became a point of division. There were those who pleaded and begged for Teddy to be allowed to win. For example, the blogger at LetTeddyWin.com has made a living off of the losing big-headed President. He has videos from a large number of Teddy’s 525 consecutive losses.

And then there were those like me who like having a perennial loser. Sometimes Teddy pulls ahead, but he always trips up or stumbles or runs the wrong way. I like knowing that he tried hard, but just couldn’t quite make it. Yet he always came out with a smile on his face. I could relate. When I was a kid, it was Wiley Coyote and Roadrunner. Wiley tried so hard to get that bird for a meal. He tried every Acme gadget, and he just could not pull it off. 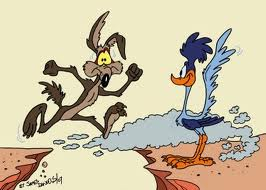 As a child, I found myself wanting Wiley Coyote to capture the Roadrunner. But I knew even then that I would be horrified if he succeeded. It just was not meant to be. It was part of life. From the Roadrunner always escaping and the Supergenius always failing to capture him, I learned that Life is not always Fair. Not everyone can win. Without Wiley's predictable losing, I would have thought that I was a loser, that I was the only one who could not make the cheerleading squad in grades 7 and 8. But Wiley always tried again. If he had ever won, the story would have ended. No more cartoons. I believed the theme song: "Roadrunner, the Coyote's after you. Roadrunner, if he catches you you're through."

And that is what Teddy's losses at the Nat's home games did for me as an adult for the last 6 years that I have been attending. It was the one sure thing at Nats Park. They might win or they might lose, but the outcome of the President's race was not in doubt. Teddy would lose. Winning did not matter.

Then there was today. The last game of the 2012 season. The Nats clinched the playoff berth on Monday night, and last night won their 97th game of the season. Today was the last regular season game, and it was a home game. And it happened. The unthinkable. Teddy won.


Did you see how Teddy did a victory dance? He was not a humble winner. I know it was a big moment for him. But it was anti-climactic at best.

I hope this was the equivalent of a one-hit-wonder. I like cheering for the underdog. I don't want Teddy to win again. I want him to lose and still keep on smiling. That would go a long way toward restoring my faith in humanity.