Two New American Saints: May They Intercede for Us FAST! 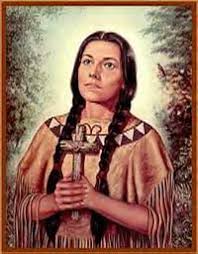 American Catholics have two new Saints to whom they can ask intercession for our earthly causes. One is Native American Kateri Tekakwitha, the first Native American saint from the U.S., and Mother Marianne Cope, a 19th century Franciscan nun who cared for leprosy patients in Hawaii.

Ten years ago, while accompanying a group of young adults to World Youth Day in Toronto, Ontario, I visited the Shrine in upstate New York where then-Blessed Kateri is remembered. As a young woman, Kateri encountered and overcame many trials in her short life. She is a marvelous example for young people as to how one can learn to follow the way of Christ despite seemingly insurmountable cultural barriers. According to an AP news story:


The two American saints actually hail from roughly the same place - what is today upstate New York - although they lived two centuries apart.

Known as the "Lily of the Mohawks," Kateri was born in 1656 to a pagan Iroquois father and an Algonquin Christian mother. Her parents and only brother died when she was 4 during a smallpox epidemic that left her badly scarred and with impaired eyesight. She went to live with her uncle, a Mohawk, and was baptized Catholic by Jesuit missionaries. But she was ostracized and persecuted by other natives for her faith, and she died in what is now Canada when she was 24.

Speaking in English and French, in honor of Kateri's Canadian ties, Benedict noted how unusual it was in Kateri's indigenous culture for her to choose to devote herself to her Catholic faith.

"May her example help us to live where we are, loving Jesus without denying who we are," Benedict said. "Saint Kateri, protectress of Canada and the first Native American saint, we entrust you to the renewal of the faith in the first nations and in all of North America!"

As for Mother Mariann Cope, she also endured and rose above barriers of many types. 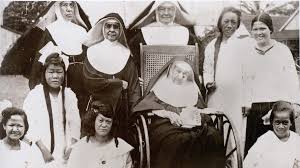 Cope is revered among many Catholics in Hawaii, where she arrived from New York in 1883 to care for leprosy patients on Kalaupapa, an isolated peninsula on Molokai Island where Hawaii governments forcibly exiled them for decades. At the time, there was widespread fear of the disfiguring disease, which can cause skin lesions, mangled fingers and toes and lead to blindness.

Cope, however, led a band of Franciscan nuns to the peninsula to care for the patients, just as Saint Damien, a Belgian priest, did in 1873. He died of the disease 16 years later and was canonized in 2009.


"At a time when little could be done for those suffering from this terrible disease, Marianne Cope showed the highest love, courage and enthusiasm," Benedict said in his homily. "She is a shining and energetic example of the best of the tradition of Catholic nursing sisters and of the spirit of her beloved St. Francis."

Mother Marianne is the shining example for us today to illustrate that we as individuals, NOT THE GOVERNMENT, should take it upon ourselves as Catholic Christians to care for one another. When we cede all of these health and welfare decisions to the government, then we are not getting the Grace that comes from the love and sacrifice that it takes to help one another. Food stamps and welfare payments are skyrocketing, and they are unsustainable.

Many churches and other charities in the United States have food banks that go unused and, as a result are understocked because people are now being given EBT cards that can be used for many non-necessities. Why should a needy mother go to the food bank for staple foods to feed her children when she is being given $500 a month that can be used for cigarettes, alcohol, lottery tickets, candy and soda, along with steaks and prepared foods that do not require her to turn on the stove or oven?

Am I cynical? You bet I am. And the only thing that will begin to change my mind is for the government to give back to the churches and the People of God the responsibility to perform the Corporal Works of Mercy, which very Catholics have even heard of these days. We as faithful Christians are required to:
Likewise we are to tend to the Spiritual Works of Mercy:
Turning these Works of Mercy over to the government does not garner Grace for us as individuals. I am certain that Saint Kateri and Saint Marianne did not turn their backs on the poor and sick in the hopes that the government would take care of them. That's why they are saints. And that's why they are models for us.

I am already praying a novena and asking both of these newly-minted American Saints to intercede for us and to ask God to give us the strength and the numbers to elect the man for President who will truly be best equipped to bring our country back from the brink of secularism and ruin. I invite you to add your voice to the supplication.