FOLLOWUP: You might have read my blog post about 6 weeks ago wherein, as part of the entry, I wrote about an elderly woman in Spain who attempted to restore a crumbling 19th century fresco. Let's just say that the restoration was less than successful.

Oddly, since that time, the "Monkey Jesus" has become more popular than the original artwork. So the latest in the story is that the Monkey Jesus has now become a popular Halloween costume. 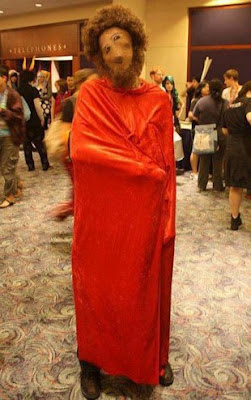 You can see more of the creative costume here.