Gloria Allred is a 71-year-old left-wing Jewish feminist lawyer in California who has made a name for herself primarily by representing many infamous women. Her Wikipedia bio is replete with her prolific involvement in suing various people. In the 1990s she represented members of the Nicole Brown Simpson family during the O.J. trial, so she got a chunk of money from that case. A few years ago she tried to extort  money out of Tiger Woods for a number of the many women who had slept with Woods during his marriage, but little to nothing came from her efforts in that case. She also represented the middle-aged Georgetown law student, Sandra Fluke, in a lawsuit against Rush Limbaugh earlier this year, claiming defamation for his voicing his opinion that she was a "slut" when she demanded that taxpayers pay for her birth control. No money there either. (By the way, Fluke spoke at an Obama campaign event Saturday 10/20/12 in Nevada and 10 whole people showed up!)

Although Allred once may have had a decent reputation as an attorney, she has, in her later life, become a sensationalist with seemingly no other motive than to interject herself into the limelight and make herself seem relevant. She was a delegate for Obama at the Democrat National Convention last month in North Carolina. Now rumor has it she is preparing to bring forth a client who will make a claim of either having had a sexual relationship with Mitt Romney or that she was harassed or abused by him at some point in the distant past. Allred is waiting until the "right time" to reveal her client, according to reports. In other words, she is not interested in justice for a true victim. Instead she is interested in trying to save Obama's skin the way Obama was saved in the run up to the Illinois Senate seat. This You Tube video of a CNN report from June of 2008 shows how dirty Obama played with Chicago-style political tactics to get his way in the 1990s when he sought the Illinois state Senate position.


Obama's run for the 2004 U.S. Senate seat for Illinois involved even more dirty tactics. In the Democratic primary, Obama's minions were able to destroy his opponent, Blair Hull, by getting his divorce records unsealed. The record showed that, during the proceedings, the ex-wife had made allegations that Hull had hit her during the marriage. The allegations were never proved, but when the records were made public, Hull withdrew from the race. Obama won the primary.

Obama then had to attack the Republican candidate, Jack Ryan, who was favored to win the race. As with Hull, Obama's minions were able to get Ryan's divorce records unsealed, and allegations made by the ex-wife were revealed wherein she accused Ryan of having asked her to perform oral sex on him in an adult club before they were married. A week after the press reported the story, Ryan dropped out of the race. That left Republicans scrambling, and they substituted Alan Keyes as their nominee. Obama soundly defeated Keyes to win the seat. It's no wonder Obama hides his own records and pays millions of dollars to keep them from coming out to the public. God only knows what sleaze and fraud is in his not-so-distant past. 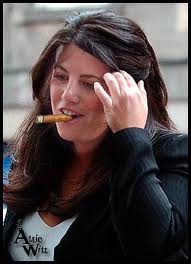 So Obama, Axelrod, and their Chicago thugs are at it again. At this point I would not care if Allred alleged Mitt Romney slept with Mother Theresa. Nor would I care if he actually DID sleep with Mother Theresa. I would still support Romney in order to get Obama and his clan out of the White House and out of Washington. Indeed, if I was Romney's campaign manager, I would have 1,000,000 posters of Monica Lewinsky printed up and ready to paste up on every telephone pole and billboard across the country, and to insert into every newspaper and every website possible. And the caption should be, "If you think it is okay for a sitting Democratic president to ejaculate on the blue dress of a young female intern in the White House and to shove cigars into her vagina, then you have no business attacking any Republican candidate."

Maybe Miss Allred should represent Eva Longoria in her "Twat Tweet" controversy since Eva is being so unfairly attacked by all those people calling for her to step down as Co-chair of the Obama campaign. So unfair. So mean. (Yes, I am being sarcastic.) But those pitying Ms. Longoria all come from the same mold as Obama, and their motto is: Cry foul when the truth is about you, and make up lies when the truth is not in your favor.

All we can do is wait.