Obama Bullies a Girl, an Old White Couple and a Black NAACP Official

My high school stepdaughter came home tonight and related how her liberal government teacher was going  on Mitt Romney today about not releasing more tax returns, and that he (the teacher) does not understand how Romney does not understand that "we" are entitled to this information. Then, raising her arm frantically  she said, "Yeah, like we're not entitled to see Obama's birth certificate or his college records or his passport and his Social Security records...." I asked excitedly, "Did you say that?" Like a souffle falling, she said, "No." "Why not?" I asked incredulously. She had said it with such force and confidence, I thought she had taken a stand against the indoctrinating bully teacher. "Because all the people in my class are Democrats," she confided.

Sadly, there has been no shortage of bullying when it comes to some liberal Democrats against those who do not agree with their viewpoints. Three instances of such bullying came to my attention today. First is the story out of Philadelphia about a female high school sophomore who was bullied by a teacher when she wore a Romney Ryan t-shirt to school. 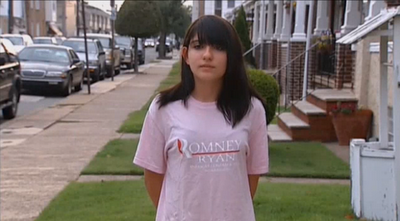 Samantha Pawlucy, a 16-year-old student in Philadelphia says that a teacher ridiculed her for wearing a Mitt Romney t-shirt in class. The teacher told her to leave the classroom, but she refused. Good for her! Later the teacher tried to say that it was a joke. But the damage is done, and the truth is evident.

The second bullying story that I read today  was about an elderly couple in California. Now, California is essentially a cesspool of liberalism, so this story is not a surprise. That's not to say it's not infuriating, nonetheless. The couple in their 70s said that some months ago they put out a handmade Romney for President sign in their yard.

To date the couples prized sign has been destroyed six times. Gene Liboff, age 78, says his wife will not be deterred. She meticulously repaired the sign and put it back out after each destruction. On one recent occasion a passerby said to Dee, "You are dead," when he saw her replacing the repaired sign. So, shortly thereafter, when she saw a baby food jar with liquid and a wick inside it laying near the sign, she thought it was a Molotov cocktail. Police confirmed that it was intended to imitate an incendiary device and intimidate the couple, but they tested the liquid and found it was not flammable. Despite that fact, the incidents of bullying and intimidation still have the intended effect of stifling the freedom of expression of those who know about what will happen if they express their viewpoints.

The third bullying example that I learned of just today is a bit different. It is Obama supporters perpetrating the intimidation, but it is not against a conservative or a Republican. Rather, Obama's minions threatened the President of the South Suburban Branch of the NAACP. 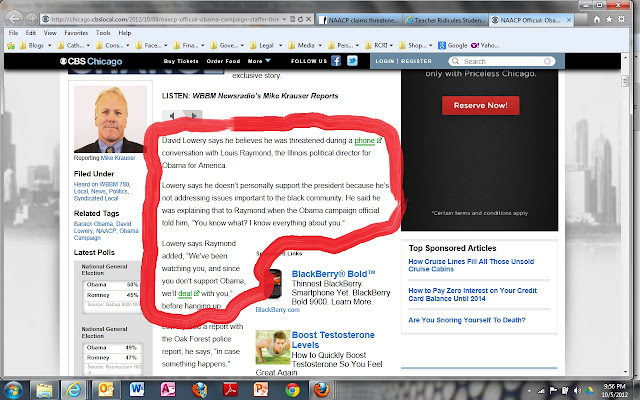 Thugs. That's what these people in the Obama campaign are. They intimidate. They use Saul Alinsky tactics. They use the Chicago way. These people who are reporting the abusive actions have reason to be afraid.

Obama lost the debate. He HATES to lose. That's why he and his minions skewed the unemployment numbers today to below 8%. He bombed so badly in the debate that they are trying to boost him up by manipulating the jobs numbers. But Obama revealed his true beliefs yet again today when he said right here in my state that "NO ONE IS ENTITLED TO SUCCESS"!! Here is the proof:


We are a month away from determining the future of this country. There are fundamental differences in the candidates. We cannot go FORWARD with a man who believes that NO ONE is entitled to success. It is despicable, disgusting, and unpatriotic.Pass this video around. Do not be afraid to STAND YOUR GROUND and SPEAK YOUR MIND! Do not let the bully's stifle the truth.