What has gotten into the President and Vice-President after the Democratic National Convention?

Obama cannot use an iPhone? The Master of Technology could not figure out how to use an iPhone to call two contributors. Or maybe he was calling to find someone to play a pick-up game? 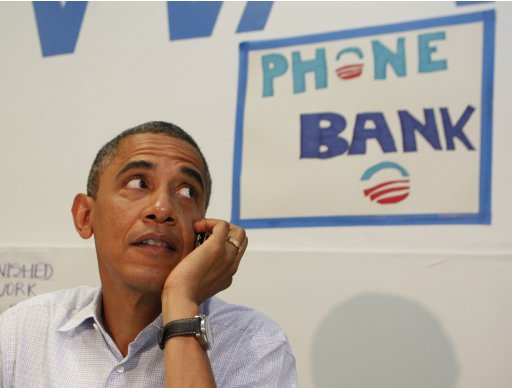 Speaking of pick-ups, Obama went to Florida where he let a Florida pizzeria owner pick him up -- literally. Where were the Secret Service agents? (Maybe they were next door at the bakery that declined to let Obama come in for a photo op?)

The video shows an even goofier encounter as Obama patronizes the star-struck pizza man, marveling over his "big heart along with big pecs."

The absence of Secret Service protection is even more pronounced when you watch that video. This guy could have crushed Obama! Also more pronounced is Obama's faux swagger. The pizzeria owner is reportedly a Republican, but he said he would vote for Obama. "I was overwhelmed when I saw him," said the owner about Obama. He must have gotten a thrill up his leg, too. In truth, van Duzer was not a solid Republican, as he said that he changed his party affiliation based on that encounter (sweeping Obama off his feet) alone. He said: "I don't vote party line, I vote who I feel comfortable with, and I do feel extremely comfortable with him." 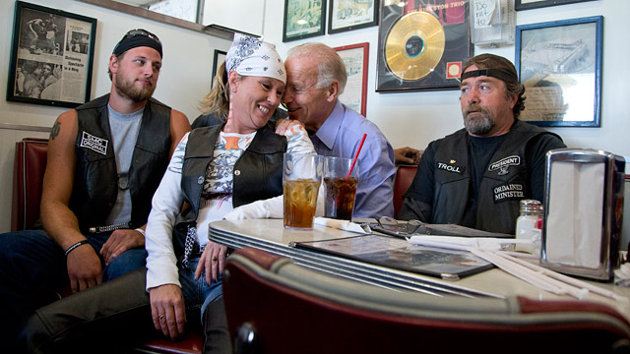 Now, I don't know about you, but Biden and the lady look like the only two who are happy in this picture. Is she sitting on his lap? Odds are the two guys flanking Biden are not his Secret Service agents. (Maybe they are next door at the bakery that declined to let Biden come in for a photo op.)  Now notice something about this next photo. 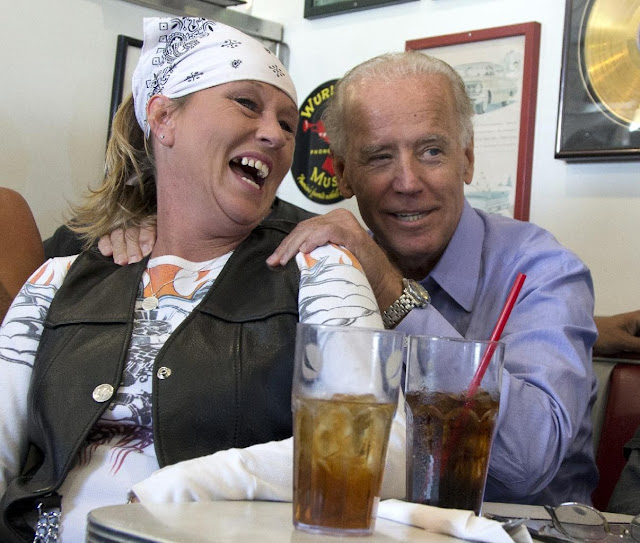 Notice Joe's left hand. Hmmmm. No wedding ring. Where is Mrs. Biden? Is there trouble in the Biden household? Did Joe think he could bachelor it on this campaign trip?

Here is what happened when Biden went into the restaurant.


When Biden entered the diner, he approached three diners seated at a counter and asked if he they'd lend him one of their motorcycles, according to the pool report.

"Can I borrow one of your bikes? They don't let me ride anymore," Biden said.

"Probably not," Jeff Cook, one of the diners, said.

After that, Biden apparently went and sat down and the biker woman sat on his lap.

In truth, the whole thing is just plain old creepy.