Today I have two baseball stories to write about. Right up my husband's alley. The stories are as unique as they can be with respect to each other, yet they have something in common that binds them at the very heart. 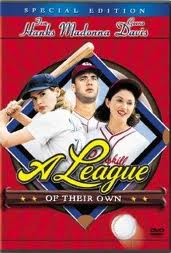 If you have been alive for the last 35 years, or if you watch a lot of old movies on TV, you may recall the classic movie A League of Their Own. My husband watches this movie every time he is flipping channels and sees it on. It came out in 1992, just as the Reagan-Bush era was coming to a close and the Clinton era was about to set in. The story is about the Women's Professional Baseball League that sprang up in the 1940s as a substitute for the men's leagues. Since the men went off to war abroad, the women baseball players were supposed to be a distraction for Americans at home.

Before getting to the substance of the movie, let me make a few observations and comments abut the movie's externals -- namely actors and locations for filming. With a quick mathematical calculation, one can figure out that the 20th anniversary of the film is this year. Ah, yes... Rosie, Madge, Geena, Lori, and Tom were all 20 years younger back then -- even younger when the filming was actually taking place. Where are they now?

In the decades since the movie came out, Rosie also came out. She announced "I'm a dyke," married her girlfriend, adopted kids, got booted from "The View," divorced her girlfriend, had a show on OWN for a few months before cancellation, secretly married a new girlfriend, and recently had a heart attack. She also had a very high-profile spat with Donald Trump a few years ago.

What about Madge? See my earlier expose.

And what of Heart-throb Hanks? After League, he charmed us all as a single Seattle dad, entertained the world as the unforgettable Forest Gump (another movie that my husband watches every time he sees it on), tore our hearts out as the heroic gay lawyer in Philadelphia, captured the essence of an American astronaut hero in Apollo 13, and portrayed the agnostic writer-turned-action-hero in Dan Brown's anti-Catholic pro-Mason series of books-made-into-movies. Hanks also came out -- as a flaming liberal in Hollywood's "progressive" cesspool.

What about Geena and Lori? No subsequent starring roles to speak of, at least that I can say I saw firsthand. They dropped off the face of the Hollywood globe. (I recently listened to Petty read one of Janet Evanovich's first books in the Stephanie Plum series, and I was not impressed when compared to the one who reads them now.)

The first point about the movie A League of Their Own that I want to make is with regard to a scene near the end of the movie. It's where Davis' character (Dottie) is preparing to leave the team after her husband returns from war and she realizes how much she misses him and home. Hanks' character (Jimmy Dugan), the rumpled manager who was a former baseball star pushes Dottie on why she is leaving.

"It's supposed to be hard," says Dugan. "If it wasn't hard, everyone would do it. The hard is what makes it great."

Scene where Dottie is leaving


Now, if you did not watch that video clip, go back and do it now (ahem, Mom). The reason I say that is not just because of the dialogue, but because I want you to notice the background -- the car across the street where the mechanic is flanked by two young women. This scene was filmed in my hometown (see for yourself) and those two women are my sister and my sister-in-law!

Both of these beautiful relatives of mine know the true meaning of "hard is what makes it great," especially Sister-in-law. She is due to give birth to her and my brother's first child in less than two weeks, after 18 years of marriage. They are blessed, and so are we!

[Bonus material: In case you are interested, here is some footage from the local TV station that was on the scene during the filming of the movie in 1991.]

Back to the second baseball story that I read this morning. It is a story that most likely only Catholics will "get," and even then only SOME Catholics.

This story is about a man we'll call Matthew. This young man was an outstanding baseball player in high school, so much so that he was drafted by the Oakland A's (the team that was featured in the baseball movie Moneyball a few years ago). Matthew started off in the minor league, and was working his way up the ranks when "tragedy" struck. Matthew was struck by a pitch that broke a bone in his wrist, sidelining him indefinitely. Although he was supposed to be out only six weeks, his injury was slow to heal.

Now, injury certainly is not unique to Matthew as an athlete. Many have exited promising careers due to something happening to their bodies or minds. What makes Matthew different is that during the time he was sidelined, he discovered that what he thought was his calling in life was not God's calling.

In our first story, we saw Dottie Hinson, a wife who was missing her soldier husband. She immersed herself in baseball, but she always knew it was not her passion, her career. When her husband returned, she realized what was important to her -- being with her husband who had been injured in battle. But she also realized that she had made a commitment to the team, and that leaving just before the World Series was not fair to them or to herself. She DID love baseball, but fully understood that there was more to life than baseball and adoring fans. She wanted the love of her husband and her family. Dottie played only that one year in the women's league. 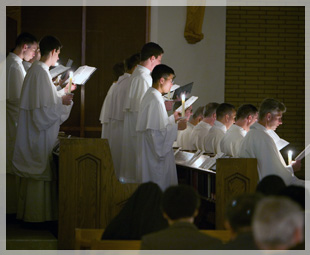 So what of Matthew? What did he realize with regard to baseball and his injury and the meaning of life? Matthew realized that God was calling him to a new life. He was called to join the Norbertine order of priests. That's easier to pronounce than their actual name: Praemonstratension Fathers, initials O.Praem.

So who is this man I have called Matthew? His birth name is Grant Desme, and his assigned religious name is (Brother) Frater Matthew. In one of the most moving vocation pieces I have ever read, the story of Grant becoming Matthew will knock your stocks of.


Here is one excerpt from the Jeff Passan piece on Yahoo! describing Grant-Matthew's decision to leave baseball. The entire piece is a must-read. 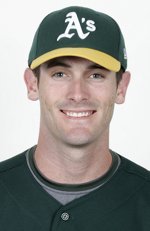 It was easy to look at Grant Desme and think he was crazy, for leaving behind the sport, the riches, the lifestyle, the family, the wife, the kids, the spoils of the bubble in which athletes live, giving that up for the same day, every day, forever. He needed to trust. God hadn't spoken to him, not one-on-one. He doesn't call like that. It's more an emptiness that only something bigger can fulfill, even if that something still has questions.

The first phone call went to Billy Beane. It was less than a month before Grant Desme needed to report to spring training, and he was about to call one of the most powerful men in the game to which he dedicated his life – the person Brad Pitt would portray in the "Moneyball" movie – and tell him he was quitting to spend the next decade becoming a priest.

And it was then he knew this was the right choice.

Because he wasn't nervous. No jitters, no anxiety. Just 10 digits to freedom.

Passan captures the story with amazing clarity. I am amazed at how he describes the calling that Grant heard and felt in his inner being. I am moved to tears. I have been there -- twice -- feeling the emptiness and the longing for more, and the call to give religious life a try. Lucky for me, I found my answer in my husband. Leaving the single life and my job at home to move to a new state and get married was not easy, but I have no regrets.

Grant DID love baseball, but fully understood that there was more to life than baseball and adoring fans. He wanted the love of God and a mission. Grant played only that short time in the minor league. Now he plays for God.

This piece could go on and on. But I will end with this inspiring video from St. Michael Abbey, the Norbertine order where Frater Matthew now resides and learns and grows. Maybe some day I will meet him. He and his confreres are definitely in a league of their own.


"It's supposed to be hard. If it wasn't hard, everyone would do it. The hard is what makes it great."