Will Obama Pick Up the Bill?

With all the gaffes and sheer lunacy that has surrounded Joe Biden of late, it's no wonder the clamor has reached fever pitch among some Democrats for Obama to drop Joe and replace him with Hillary Clinton.

Back in 2011 there was talk of this. Then a few days ago Sarah Palin even said that Obama should drop Joe and add Hillary. John McCain backed that idea. But yesterday Obama dismissed Sarah Palin's comments as "chatter and noise." And liberal media dismiss the suggestion as bad for the Democrat party.

BUT... hold all that denial! Today's headlines on the Drudge Report are that Obama and Joe and Hillary were all three meeting this morning, in private, no press allowed.

Would Hillary accept the position? Are you kidding me? Of course she would! She is drooling over the possibility. Just because she said she will not run for office again, that does not mean she meant it! She would be a fool to say no. Her only chance of winning the Presidency in 2016 is if she is the Vice-President. If Romney wins, he will get four more years in 2016, and Ryan will then succeed him for eight years in 2020 and 2024. By then, Hillary will be 80 years old. That would be a bit aged, even for her staunchest supporters.

Hmmmmm.... I think that "change" may be coming after all. But, then again, Obama knows that if he does clear the table of Joe, he will definitely get stuck with the Bill! 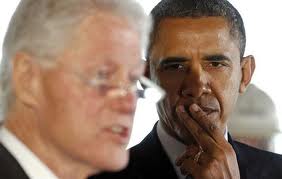