There has been a shooting at the Family Research Council in downtown Washington, D.C., across the street from the National Portrait Gallery, in the area known as Chinatown. The FRC is a conservative organization that believes in (the protection of) the family as the center of society. They were in the news recently when they issued a statement mourning the passing of pro-life icon Nellie Gray.

There have been minimal details released about the incident at the FRC, but at least one person -- a security guard -- was reportedly injured in the arm. One report says two persons were injured but I cannot find any more details.

If I was of a liberal mindset, I would point out to you that of of the Occupy D.C. camps is only about 5 blocks from where this shooting took place. Occupy D.C's website lists its address as 1112 16th Street, NW, Washington DC. When you Google that address, you will see that it brings you up to a building that is labelled as the YMCA. In the left margin it lists:

No mention of Occupy D.C. Is someone supplying them with space?

You will also notice that this 16th Street address is only 3.5 blocks away from Lafayette Park, which Americans will recognize as the park across the street from the White House. 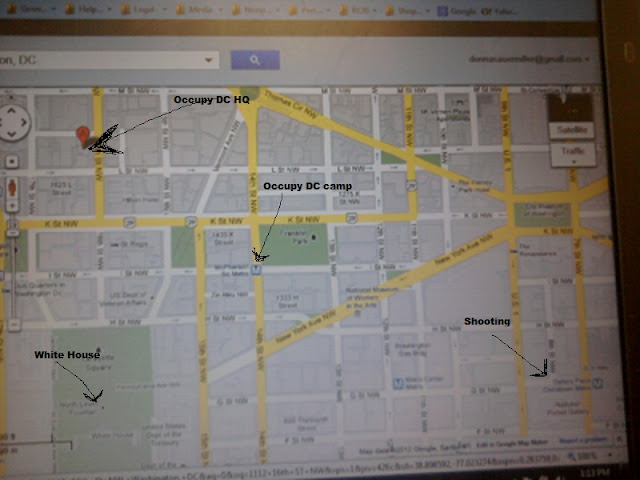 There is nothing to support a connection between the ODC camp or HQ locations, the White House, and the shooting, but that does not matter. I am merely making an observation. These days you need not have any evidence to insinuate something. It's sufficient to say I heard this from an anonymous source. So, am I willing to play the game also? Hey, if you can't beat 'em at their Saul Alinsky tactics, why not join 'em?