The story I wrote about this morning of the shooting in downtown D.C. is developing. The shooter has been identified as Floyd Lee Corkins II from Herndon, VA. That location is a few miles from my home. The Facebook page for this man looks like this: 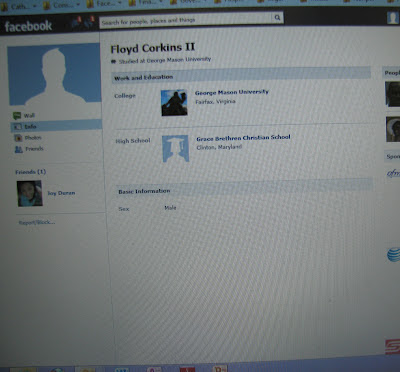 Now I don't know if someone went in and erased information from the man's Facebook profile since there is very little on it. It's possible. But if that's the case, why is there one woman's picture left under his Friends? The interesting thing is that she lives Cardona, Rizal, wherever that is. (I checked. It's in the Philippines.) Is she his only friend? I sent her a message to ask her if she knows about the shooting and how well she knows Mr. Corkins. Naturally, she did not respond. Why should she? I am a stranger, and she does not know me from Eve. But my curiosity is aroused.

Mr. Corkins' Facebook page indicates he went to Grace Brethren Christian School in southern Maryland, and he went to college at George Mason University in Fairfax, Virginia. That might explain why he lived in Virginia when he was raised (in part, at least) in Maryland. Most recently he worked part time at an LGBT center in D.C. as a receptionist.

According to one news report, Mr. Corkins parked his car this morning at the Metro station a mile or so from my house and took the train into D.C. Hubby takes that train, but he was most likely on a train an hour or so earlier than Mr. Corkins. Eerie!

That same story also reports that "the suspect was carrying a backpack full of Chick-Fil-A promotional materials and two loaded magazines." I think it's safe to conclude thatMr. Corkin was upset with the FRC's support of similar issues as the ones that Chick-Fil-A came under fire about recently. FRC is a lobbying firm that supports traditional marriage and other family issues, and it has received funding from Dan Cathy, the Chick-Fil-A executive whose religious views were attacked by Rahm Emmanuel and the mayor of Boston, amongst other politicians, last month. It makes me wonder if Adam Smith, the drive-through bully, feels any responsibility for this incident. I doubt it.

Mr. Corkins, the shooter, is alive and in custody, so it will be interesting to see how this unfolds and what he says was his "beef" with the FRC. Then again, we may never know, if he hs a smart attorney.

Thank God this story was not as tragic as some of the recent shooting rampages have been. God bless the families and other loved ones of all those who were involved.

[UPDATE Thursday 8/16: There are two other Facebook pages under the name Floyd Corkins, without the "II" included. Neither reveals much, exceot one has several more friends. Someone set up a fake page called "Floyd Corkins the 2nd is awesome". There is a picture posted on it of Mr. Corkins when he was arrested yesterday after the shooting incident. I truly am praying for this guy.

Also, the young woman in the Philippines named as a friend on Mr. Corkins Facebook page responded to my email and simply said she is not in the United States.