If the subject was not so serious and distorted, I would be amused. Instead, it infuriates me. The world is upside down.

I get so angry over the way liberals project their own hatred onto unsuspecting citizens who are just minding their business and their consciences. I won't try to go back and recite all of the possible examples to make my point, although the examples are innumerable. Rather, let's just look at two specific examples, much of it recent in development.

You will recall the infamous events involving the New Black Panthers in Philadelphia during 2008 election. The thugs who threatened voters were charged with voter intimidation in the time between the November election and the end of the Bush administration in January of 2009. 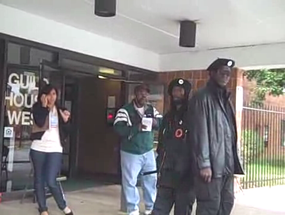 Although the prosecution began under Bush, within less than four months of the Obama administration taking over, the case against the New Black Panthers was dropped when Eric Holder took over the Department of Justice. Eventually it came to light, from a former prosecutor at the DOJ, that the policy of the DOJ was that they were not going to prosecute alleged violations of civil rights when rights violated belonged to Whites. To date nothing has happened of note in the attempts to get this reversed and the charges reinstated.

Fast forward to earlier this year and the Trayvon Martin case. The New Black Panthers called for vigilante justice and placed a bounty on the head of George Zimmerman, the one who shot Trayvon in self-defense, before Zimmerman was even charged with a crime. The case has been playing out in the media, and there is little chance for justice in Zimmerman's case since the jury pool has been so widely tainted by celebrities, media, and politicians convicting Zimmerman in the court of public opinion, sans the justice system.

Now, we heard this past week about the rantings of Michelle Williams during a New Black Panthers' radio broadcast. She uses foul language, perpetrates lies, spews vitriolic epithets, and flings disparaging names at white people (calling them "Crackers").


So during an Aug. 12 rant on Black Panther radio, she let loose not only on “crackers” but also on black conservatives. During a particularly colorful diatribe explaining why she hates whites and why all blacks should, too, she vowed that as long as whites keep characterizing blacks as “ni**ers,“ her ”feet [will be] on your motherfu**ing necks.”

Most disturning of all, she calls for violence at the upcoming Republican National Convention in Tampa in two weeks. You really have listen to the broadcast of Ms. Williams' diatribe in order to get the full impact of the hatred she preaches. The New Black Panthers are haters. There, I said it. And there is plenty of evidence to back it up. If the above isn't enough, read on.

In the New Black Panthers' radio opening for August 13, they played a shocking segment from Khalid Muhammad, a former spokesman for Louis Farrakhan’s Nation of Islam. In it, Muhammed advocates extreme violence against white people in general, and specifically gays, lesbians, babies, and women:

Why kill the older crackers? The old crippled crackers in South Africa. How in the hell you think they got old? They got old oppressing and killing black people [inaudible].
Kill ‘em all. Kill the fa**ot. Kill the lesbian. And after you’ve killed them all […] I say then you go to the god damn grave, and dig ‘em up, and then kill ‘em a-god-damn gain because they didn’t die hard enough.

Chilling words. Where is the Department of Justice? Why are these people not being held accountable? Does freedom of speech protect them? If it was a white person calling for the execution of black men, women and children--at home or abroad--would it be tolerated, much less protected? Perhaps. But that does not lessen the fact that the New Black Panthers has haters in its midst.

Now, example number two of liberals projecting their hatred is related to the Chick-Fil-A case of late. It started with Rahm Emmanuel and others calling for the banning of Chick-Fil-A stores in their "kingdoms." Those calls for discrimination by government officials led to millions of Americans patronizing Chick-Fil-A on August 1 to show support for the fast food chain and its president and COO, Dan Cathy. The next day a self-filmed video surfaced on You Tube of a man in the drive-through of a Chick-Fil-A berating an innocent employee, accusing her and the entire company of being haters. The man was fired from his job that same day when his employer learned of his hate-filled actions.

Fast forward to this week when another hate-filled man entered the lobby of the Family Research Council in downtown Washington, D.C., and intentionally shot a security guard. Floyd Lee Corkins II was overpowered by the same guard he shot, with the help of some others in the lobby, and a mass shooting was averted. Corkins carried a Sig Sauer (no relation) and had 50 rounds of ammunition in a back pack, along with 15 sacks of Chick-Fil-A. It is reported that he shouted hate messages, called the FRC a hate organization, and expressed opposition to the FRC's support for traditional marriage. The shooter, a man named Corkins, intended to shoot as many people as he could and leave a bag of Chick-Fil-A food by the bodies. It is also suspected that he had targeted a second conservative organization a few blocks away. There are no details available as to what his intentions were.

In the wake of this disgraceful and unwarranted near-tragedy, the Family Research Council--which was the VICTIM of Corkins' hate crime, was called a "hate group" in the media because they support marriage as a sacred institution between one man and one woman. Corkins stated that he hated the political views of the FRC. Yet newspapers had to ask, "Was it a hate crime?" You think? In D.C., perpetrating a crime against someone for their political views IS a hate crime, so both federal prosecution and District prosecution should be forthcoming.

The White House dodged the question when asked by the media if Mr. Obama thought this was a hate crime. I guess Mr. Leo Johnson did not look like Mr. Obama's son. And apparently Mr. Obama did not know as much about this widely-covered shooting--that occurred 5 blocks from his house--as he did a few years ago when he expressed his opinion abut an incident that occurred 500 miles away. In that case, Obama said the Cambridge police "acted stupidly" when they arrested a black Harvard professor after a confrontation with police who suspected he was breaking into a house. The latter incident led to the infamous "beer summit." Maybe Mr. Obama will invite the shooter, Mr. Corkins, and the FRC security guard he shot, Mr. Johnson, to a "chicken summit" in the Rose Garden. That is, after the security guard gets out of the hospital and the shooter gets out of jail, say in 30 years.

Yes, I have called some liberals "haters." But truth is my defense!