The Fight to Save Buckyballs from Nanny State

I remember as a kid playing with a toy called "clackers." They were made of two balls of solid glass (actually acrylic, but they looked like glass to us kids) with a string about 24 to 30" long having each end embedded in one of the glass balls. A metal ring was affixed to the middle of the string. Holding the ring so that the balls hung down on the string, you would slowly lift and lower your hand at the wrist until the balls bumped and bounced off each other in a steady rhythm. When the time was right (determining the right time was what made you good at the game), you would raise and lower your hand that was holding the ring until the balls moved up an down in 180 degree arcs, hitting each other at the top and bottom of the pendulum-like swing such that their momentum and your pivoting hand sustained them in motion for as long as possible.

Naturally, the noise these balls made when hitting each other was loud and annoying, so Mom would make us go outside to use them. I owned more than one pair of clackers (purchased with my weed-pulling money) over time since the balls would chip away and sometimes come off the string. My wrist stayed bruised because if the balls missed each other, they invariably wrapped around your wrist until your wrist bones stopped them.

Then in 1971 (I now know), the Food and Drug Administration warned that the balls on clackers could chip, fracture or break and that the strings could fray and break, sending the projectile balls into one's eyes or into other nearby objects or persons. We kids knew this could happen from first-hand experience. It wasn't long until the noisy toys in their original form were gone from the retail market. You can now find them only at flea markets or on E-bay, when someone dares to part with the historical items.

Why the Food and Drug Administration was involved is not clear since clackers (unlike crackers) were not intended to be eaten as a food nor as a drug. No doubt clackers were one of the products that compelled the government to create the Consumer Protection Safety Commission a year after the FDA warning, in 1972.

Now here we are, 40 years after the CPSC was initiated, and they are trying to "protect us" by banning another of my favorite toys - Buckyballs. Although Buckyballs, like clackers, were not intended to be eaten, apparently some people do just that. So the CPSC is suing to stop their sale and to issue a recall. According to a USA Today story from July 26, 2012:

Some major retailers, including Amazon, Brookstone and Urban Outfitters, have agreed to stop selling these and similar products at CPSC's request. Children who swallow the tiny magnetic balls can require surgery when they become stuck in their intestines.
Dozens of children have needed surgery to remove the tiny magnets in Buckyballs as well as those sold by competitors of its maker, Maxfield & Oberton. At least 12 of the ingestions involved Buckyballs.

There is no explanation as to how most of the children who ate the Buckyballs got them in the first place. One incident that has been described involved a 12 year-old girl who took two Buckyballs that a friend brought to school and put them on her tongue to pretend it was pierced. I guess she then decided to swallow. Not a good idea. Two surgeries later she was Bucky Ball free.

It does not seem to matter to the CPSC that there are clear warnings on the packages that Buckyballs come in. Nor do the adults who gave the children a desk toy to play with in the first place seem to share some responsibility. 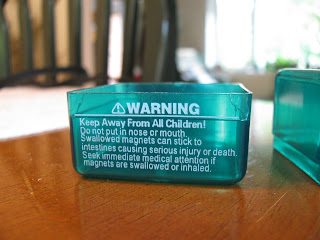 But the owner of Buckyballs is fighting back. The "Save our balls" campaign is in full force. I am doing my part with my YouTube video, which you can see below or at this YouTube link.

In the end, there are many other products that are more hazardous than Buckyballs. "Geekmom" on wired.com suggests that these seven things be banned next:
1. Balloons
2. Everything with wheels
3. Electrical outlets
4. Doors
5. Laptop batteries
6. Lego toys
7. The Sun

Buckyballs. Get them before they are forever gone from the marketplace. 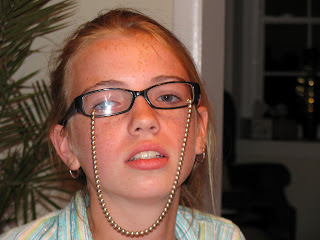