[Viewer discretion advised - disturbing picture included 3/4 of the way through this post for purposes of illustration.]

And now, presenting the man of the hour: Paul Ryan!

I am psyched by Romney's choice of Ryan for Vice-President. The anticipation leading up to the announcement of Romney's running mate was starting to get to me. With all the names being bantered about, there was a lot to absorb and contemplate. Rubio, Rice, McDonnell, Pawlenty . . . any of them would have been a good choice. But Ryan has captured a piece of my heart in recent months. That's because he is a Catholic who recently was attacked mercilessly by a few isolated Catholics and even some non-Catholics. It made my blood boil a few months ago when this happened.

I have previously written on the Ryan budget and the hypocrisy of the left in opposing it. It is particularly troubling to me that there are some Catholics who recently have stated publicly that the Vatican will not accept their right to their own thinking and reasoning on matters of faith and doctrine while they themselves were simultaneously slamming Paul Ryan's religious beliefs. While some of these Catholics were seeking sympathy from the American public, Paul Ryan put forward that he believes his budget is supported by his Catholic beliefs and his own understanding of the principle of "subsidiarity." (The Holy See pronounced "subsidiarity" to be one of the 10 core principles in its reform of the Code of Canon Law, and it figured largely in the more than 15-year preparation of the new Code of Canon Law, leading up to its 1983 promulgation.) Here is a portion of how Ryan explained his position.


A person’s faith is central to how they conduct themselves in public and in private. So to me, using my Catholic faith, we call it the social magisterium, which is how do you apply the doctrine of your teaching into your everyday life as a lay person?

To me, the principle of subsidiarity, which is really federalism, meaning government closest to the people governs best, having a civil society of the principal of solidarity where we, through our civic organizations, through our churches, through our charities, through all of our different groups where we interact with people as a community, that’s how we advance the common good. By not having big government crowd out civic society, but by having enough space in our communities so that we can interact with each other, and take care of people who are down and out in our communities.

Those principles are very very important, and the preferential option for the poor, which is one of the primary tenants of Catholic social teaching, means don’t keep people poor, don’t make people dependent on government so that they stay stuck at their station in life. Help people get out of poverty out onto life of independence.

To me it is untenable that some Catholics, in the company of a plethora of liberal professors of theology and other unrelated subjects, excoriated and ridiculed Ryan, asserting that his budget is "immoral" and that he fails to understand the principle of subsidiarity. Here is what one article says:

Ryan previously defended his budget cuts by saying they were informed by his Catholic faith.

"Many politicians offer deeply flawed theological justifications for the federal budget. They ought to get some theological help," Campbell said.

She rejected the argument that aid programs create dependence. "Food stamps create not complacency, but opportunity," she said. (emphasis added)

So, Ryan's Catholic beliefs are "deeply flawed"? And he should get some "theological help"? This condescending verbiage nauseates me. Just how do food stamps create "opportunity"? [Maybe I should insert the EBT video here.] The patronizing tone of these comments is beyond Christian words.

Who is it then that has the definitive statement on "subsidiarity?" Not even the Pope and the Bishops understand it to hear some of these liberal professors and Catholics tell it. And some liberal bishops assert that no one but they can invoke the principle. So that leaves us lowly non-religious, uneducated lay people to wait for further instructions.

But luckily Paul Ryan will not be easily dissuaded. He is ready to grab the bull by the horns. Regardless of what the liberal bishops, Catholics and professors say, the principle of subsidiarity IS the answer. The best place for rules and regulations to be made is at the lowest level of authority that can handle it. In some cases this may be the individual and in some cases this may be the local community and in some cases it may be the state. Very rarely should it be the federal government, which is a fundamental principle of our Constitution's enumerated powers clause. We have become so federally top-heavy that no one here in Washington wants to give up their grip on power, prestige and privilege. But it is time to put a team into the White House that will do just that.

I pray that the bishops have learned this lesson. They got a rude awakening when, after first supporting Obamacare and then opposing its lack of a no-tax-dollars-for-abortion provision, they realized too late that when you turn control of our lives over to the federal government you also have to accept the rules that they impose. Sure you can hope the government will "do the right thing," but when deception is the core of an Administration, you have to expect the worst. You cannot count on a Catholic vice-president or a Catholic head of the HHS to abide by Catholic teaching when neither has a stellar record of adhering to Catholic teaching.

Thus, in this culture where religion has become anathema, we reach the crisis point that we are facing today -- the oppression of religion and the deification of the state. Case in point is the mandate for all employers to pay for birth control, sterilizations, and abortafacients. Employers get no choice in the matter unless they are willing to pay a tax. Even religious organizations have to figure out how to violate the beliefs of their faith in order to provide freebies for women (not men, only women) so they can have have sex without facing the natural consequences. Morning-after pills, tubal ligations, and diaphragms will be at your fingertips, Ladies.

And without a doubt, full-blown taxpayer-funded abortions are just around the corner if Obama gets a second term. Remember how he said he'll have "more flexibility" in his second term? (Sure he was talking to Russia's Mevedev about missile defense, but don't doubt for a second that he means that with regard to every issue on his political agenda.) And then it's just a matter of time before the government will be able to tell anyone they want that they MUST get an abortion. If you think that is far-fetched, just view this picture of a Chinese woman whose government forced her to abort her seven-month old child  under its socialized medical system. 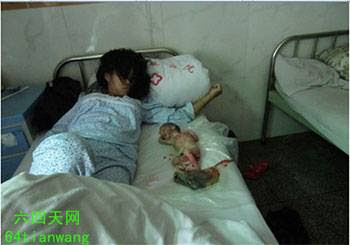 Sadly, I am convinced that that is where we are headed if Obama and Biden get re-elected.

I hope and pray that Paul Ryan is able to explain things in a way that we lowly, less-educated, LAY Americans will understand. (Yes, I am being facetious.) Maybe we Conservative Catholics will now be able to stand up to the liberal Catholics and professors who hypocritically have criticized, ridiculed, and questioned the motives of Paul Ryan, a devout fellow Catholic and family man. Ryan can show them that WE TOO are capable of understanding the Gospel. The liberal Catholics' message to the Vatican hierarchy is applicable to themselves as well: "You don't have a lock on understanding and applying the Good News."

Finally, to the religious who criticize Paul Ryan, I would ask this simple question: "Are you willing to let all the salaries of all the members of religious orders be taxed along with the rest of us?" The salaries of religious, some making 6- and 7-figure salaries, are not taxed. The same is true for the religious orders as a whole. The reason? They assert that they know better than the government what to do with their money in order to help people. Are they willing to credit the rest of us with that same intuition about our moneys? I give my "fair share" to help others in charity, in addition to the high federal, state and local taxes that I pay on my income. So I do not appreciate anyone telling me that Jesus demands more (money) of me.

Out of the pittance I have left from my salary, I just ordered my Romney/Ryan yard sign and bumper sticker. And in my liberal northern Virginia neighborhood, I will display them proudly, defend them boldly, and promote them vigorously.