When I first started this blog six months ago, one of the first columns I posted was about an artist named Jon McNaughton. He had just completed a painting called "One Nation Under Socialism," and it was very thought provoking and politically provocative. He sold that original painting to Sean Hannity, the Fox News host. Here is what that first painting that I wrote about looks like. 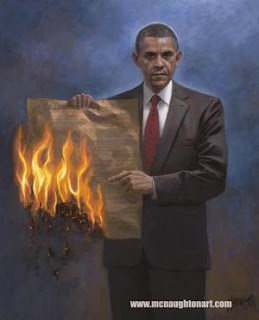 Now McNaughton has finished another even more provocative piece. It is unique because it is interactive. You can go to his website and interact with the painting, which contains more than 60 symbolic images representing ways that Barack Obama has failed as the President of the United States over the last four years. He calls it "Obamanation," and this is what the painting itself looks like. 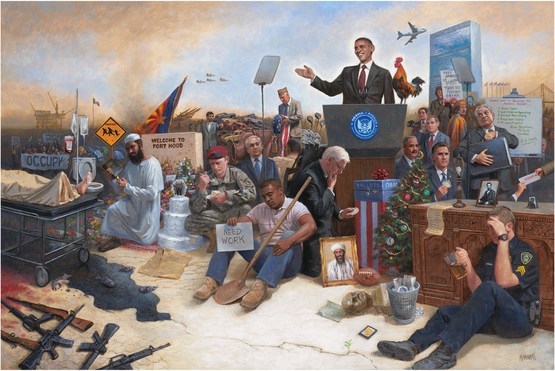 What is brilliant about the painting and the website is that you can roll your cursor over the painting and it will reveal the meaning of that particular symbol. Many of them are as plain as the nose on your face, but some are more subtle and may not be as apparent until you read his explanation. Some have more than one meaning. I want to embed the You Tube video here also, so you can hear McNaughton himself explain the painting.


I cannot express how brilliant this painting and the symbols are. How anyone can see this painting, interact with it and read the artists' astute observations, and still vote for Obama is beyond me. I know that there are some who will do just that. They have dismissed the "signs" for the last four years, so I am not naive enough to think that they will have a change of heart now. But if they really still have hope that Obama can solve the nations problems at this point, then they are living in a fantasy world of their own.

I am grateful that there are artists with thefortitude to spread the message of the destruction that Mr. Obama has done and will continue to do if we do not stop him. McNaughton's paintings are for sale here. I hope he sells millions.

Email ThisBlogThis!Share to TwitterShare to FacebookShare to Pinterest
Labels: Jon McNaughton, Obamanation, One Nation Under Socialism