On Saturday, August 25, we lost a giant of a man -- Neil Armstrong. I was but an eight-year old child when Armstrong took that first historical step onto the surface of the moon, on July 20, 1969. 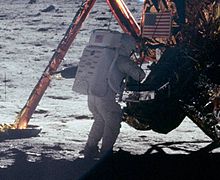 Honestly I cannot recall the first lunar walk from memory, nor the impact it had on my life at the time. It would have been the summer prior to my starting third grade, so I undoubtedly was more engrossed in Barbie dolls, jump ropes, clackers, or dirt clod fights that day. But I do recall that the event was a sensation amongst the adults in my life. 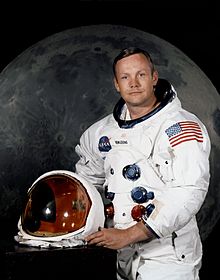 In 1969 my father, alongside my mother, was working hard, primarily as a farmer, to provide for and raise their first eight children. To me as an eight-year-old child, what my dad did to support our family was as epic in my life as what Armstrong contributed to the world. Although he never traveled in outer space, my dad's passing in 1995 has left a space as large as the Milky Way in my heart. To help fill that void and keep his memory alive, when someone dies, I like to picture my dad in Heaven greeting them as they come through the pearly gates. I am sure Daddy had a lot of questions for Mr. Armstrong when they met on Saturday.

If there was one thing that saddened me besides the thought that America lost a pioneer on Saturday, it has to be the response from the President to the sad news of Armstrong's passing. Now, I will say that the family of Armstrong, when asked how best to honor him, did respond as follows: "For those who may ask what they can do to honor Neil, we have a simple request. Honor his example of service, accomplishment and modesty, and the next time you walk outside on a clear night and see the moon smiling down at you, think of Neil Armstrong and give him a wink." What a wonderfully simple but meaningful tribute.

What saddened me was that, in response to the announcement of Armstrong's death, Obama chose to post a picture of himself looking up at the moon on a social media website. Why was this inappropriate, in light of the family's request? Mostly because the photo was not even taken after Armstrong's death! It was recycled from the White House Flick'r account from April of this year when Obama was in Colorado. It had nothing to do with Neil Armstrong. Rather, it was all about Obama being seen and seeming relevant.

Yes, the president couldn't even be bothered to actually go outside the night that Armstrong died and take a real picture of himself reflecting on Neil Armstrong. He dug up an old one and posted it instead. It's like he is Forest Gump, inserting himself into the events of 42 years ago when Americans watched proudly as Armstrong and his fellow crewmen made history.

There have been some interesting reflections on Obama's poor response. The best one was from Mike Flynn on Breitbart.com, who wrote in part:


Obama took to his tumblr page to offer a tribute to Neil Armstrong. The words--two sentences--are fine in a generic politician way. But, Obama being Obama, he injected himself into the tribute. He included a photo, not of Armstrong or the iconic step onto the lunar surface, but of himself, gazing up at the moon.

Obama is a literary construct. It's as if Zelig jumped off the movie screen and took up residence in the Oval Office. He puts himself in the frame of historical events, even if he has only the smallest cameo. He let Democrats in Congress construct the stimulus package, as well as his signature legislation, Obamacare. He comes on the scene just in time for the photo-op, after others have done the heavy lifting.

Neil Armstrong did the heavy lifting. Even a tribute to his death is just another photo-op for Obama.

Now, I was born the same year as Barack Obama, so that means we were about the same age when Armstrong walked on the moon. Obama would have been a couple of weeks shy of age 8, and was known as Barry Soetoro and was living in Indonesia in 1969. Undoubtedly, Obama, like me, would not remember much about the event either. Indeed, he has let it be known as an adult that he does not believe in American exceptionalism, so such a historical feat would not have been significant to him. He lived most of his young life around radically left people who likely would have said, "The Soviets were first in space, so get off your high horse, Mr. Armstrong."

One of those radical leftists whom Obama knows is Bill Ayers. Remember him? He is the same anti-American oaf who, while Neil Armstrong was training for the moon-landing mission and actually walking on the moon in 1969, was bombing the Pentagon and the Capitol and other buildings in protest. Ayers was on the FBI's most wanted list for a time. 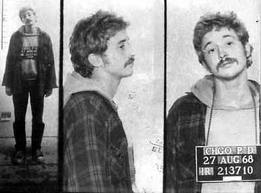 Of course, Mr. Obama has been confronted about knowing Bill Ayers, and this is how he responded in one interview:


This is a guy who lives in my neighborhood, who's a professor of English in Chicago who I know and who I have not received some official endorsement from. He's not somebody who I exchange ideas from on a regular basis. And the notion that somehow as a consequence of me knowing somebody who engaged in detestable acts 40 years ago, when I was eight years old, somehow reflects on me and my values doesn't make much sense, George (Stephanopoulos). 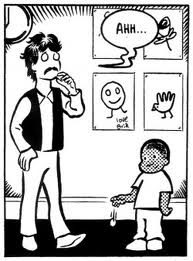 Obama deflected the question about his relationship with Ayers by trying to make it sound like him being eight years old when Ayers conducted his terrorist activities somehow exonerates him from his associations with Ayers as an adult.

We now know that the relationship between Obama and Ayers was much more substantial than Ayers being "just a guy in the same neighborhood" as Obama. Obama launched his political career in Ayers' living room, served closely on two socialist-leaning corporate boards with him, and engaged him to write his biographies when there was nothing substantial to write about.

Post Script: I have to go find the movie Zelig and watch it now.