Must We Understand Before We Believe?

During the month of August, the Popes traditionally spend time at the summer papal residence, Castel Gandolfo, outside the city of Rome. It is kind of like the U.S. Presidents' Camp David retreat. The Pope continues with his duties while he is away, and on Sunday Pope Benedict gave a homily on the Bread of Life discourse that was the Gospel. I have previously commented on this Gospel and its meaning with regard to those who did not believe what Jesus said about the bread being His body.

I want to highlight a couple of excerpts from Pope Benedict's homily. It may look like a long quote below, but I have condensed it like a can of Campbell's soup -- I took out the water and left you with the solid parts. This homily speaks to the growing assertion among many Catholics that the Church may need to lose some of her members in order to be strengthened. (You can listen to the homily or read the entire transcript at this link.) I have italicized certain phrases, so read those slowly as you absorb the Pope's (and St. Augustine's) words.


Dear brothers and sisters!
In the past few Sundays we have meditated on the “Bread of Life” discourse ... John ... reports that “from that time many of His disciples drew back and no longer went about with Him.” Why? Because they did not believe the words of Jesus when He said: “I am the living bread which came down from heaven. He who eats my flesh and drinks my blood will live forever” ... This revelation ... remained incomprehensible to them, because they understood it in a material sense, while in these words was foretold the Paschal Mystery of Jesus, in which He would give Himself for the salvation of the world: the new presence in the Holy Eucharist.
Seeing that many of His disciples were leaving, Jesus addressed the Apostles, saying: “Will you also go away?” As in other cases, it is Peter who replied on behalf of the Twelve: “Lord, to whom shall we go?" ... On this passage we have a beautiful commentary of St. Augustine ... “Do you see how Peter, by the grace of God, by the inspiration of the Holy Spirit, has understood? Why did he understand? Because he believed. You have the words of eternal life. You give us eternal life by offering your risen body and your blood, your very self. And we have believed and understood. He does not say we have understood and then we believed, but we believed and then we understood. We have believed in order to be able to understand; if, in fact, we wanted to understand before believing, we would not be able either to understand or to believe. What have we believed and what have we understood? That You are the Christ, the Son of God, that is, that You are that very eternal life, and that You give in Your flesh and blood only that which You are.”  ...
Finally, Jesus knew that even among the twelve apostles there was one that did not believe: Judas. Judas could have left, as many of the disciples did; indeed, he would have left if he were honest. Instead he remained with Jesus. He did not remain because of faith, or because of love, but with the secret intention of taking vengeance on the Master. Why? Because Judas felt betrayed by Jesus, and decided that he in turn would betray Him. Judas was a Zealot, and wanted a triumphant Messiah, who would lead a revolt against the Romans. Jesus had disappointed those expectations. The problem is that Judas did not go away, and his most serious fault was falsehood, which is the mark of the devil.

I am a huge fan of St. Augustine, whose memorial we just celebrated on August 28. He was born in 354 A.D., only four decades after Christianity was recognized by Constantine (313 A.D.).  A number of years ago I wrote a paper in one of my Church history classes in which I examined the extensive collection of Augustine's homilies throughout his lifetime and showed how they related to the context of what was going on in the world and in his own life at that time in history. He was an amazing theologian, which explains why he is a Doctor of the Church and probably the most influential of the early Church Fathers.

[UPDATE: There is a movie about St Augustine that is trying to get enough support for a release in the U.S. It is called Restless Heart in tribute to a quote from Augustine's autobiography Confessions. I memorized it--in Latin-- for one of my history exams many years ago. He said, "Fe cisti nos ad te Dominum, et inquietam est cor nostrum donec in te requiescat." "You have made us for Yourself, Lord, and restless are our hearts until in You they rest."]

This homily of Pope Benedict comes at a time when many Catholics are seeking too hard to understand before they are willing to believe. Is the Pope calling for "blind faith"? Not at all. But what he is saying is that if you want to understand (to see), you must first believe. But belief is only likely when the one seeking to believe trusts the source from which the knowledge flows. So, if the seeker does not believe that the leaders of the Church are speaking the truth, then they are not likely to believe. And without belief, understanding will not come. I do not have to understand the hypostatic union between the three Persons in the Holy Spirit in order to believe in this tenet of Christianity. I do not have to understand the concepts of accidents and substance in order to believe in the Real Presence. But because I believe, the understanding that I am able to come to (with my limited comprehension of philosophy) reinforces my beliefs.

I was heartened this morning to see a story relating that there are some Catholics in Boston who have called upon the Cardinal there to distance himself and the archdiocese from a multi-millionaire who has given and continues to give millions of dollars to Barack Obama's re-election campaign. "Lay Catholic leaders in Boston are calling on the Archdiocese to end its relationship with a Catholic magnate who has emerged as a top supporter of the Obama re-election effort, and who has close ties with an HHS mandate architect and the abortion industry." It probably will not have any impact since the man gives a lot of money to the Church there also. But at least the story is being told and the issues are being raised.

My prayer today is that, when it comes to the teachings of the Church, we stop trying to understand them before we believe them. May we have the courage and the trust to accept that the Holy Spirit is at work in the Church, and that we must believe what the Spirit teaches in order to understand. Otherwise, if we chose not to believe, we will find ourselves having to choose between walking away or staying to dance with the devil. 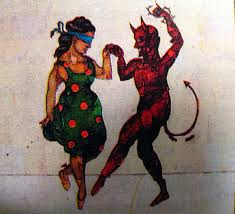