It's All About Control

Barack Obama's affection for the teleprompter is no secret. For four years now we have seen him use it to keep himself on point and to control the message. Impromptu speaking is not his forte, as his recent gaffe of "you didn't build that" reinforced. POTUS cannot control the message when he speaks without his TOTUS. Control the message. 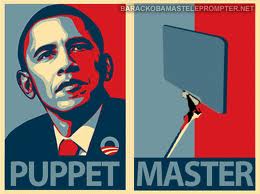 Does anyone remember the storyfrom March of 2011 when a reporter from Orlando was locked in a closet during an Obama fundraiser which Joe Biden attended? There was no way to spin that one -- every report concurred that the male reporter was put in a closet and not allowed to come out. The reporter was himself an Obama supporter, but the Obama staffers feared Biden going off-message and kept the reporter secluded as long as they could contain him. Even the reporter's own explanation of the event came out smelling fishy as he tried to cover for the Obama-Biden staffers. He wrote: "When I arrived I was told I would not be able to speak with any of the people at the party ...." Try as he might, Scott Powers couldn't spin this event to favor Obama and Biden. He could not control the message.

Obama's minions are all about controlling the message. This week their deputy campaign manager, Stephanie Cutter, was caught in a blatant lie when she claimed the Obama campaign knew nothing about Joe the Blamer, who starred in a campaign ad claiming that Mitt Romney killed his wife. When a recording quickly surfaced of Cutter herself interviewing Joe the Blamer earlier this year about his wife's death from cancer, Cutter was caught with her hand in the cookie jar. The story of Joe the Blamer was even featured on the official Obama website, so denying knowledge of it was lunacy on Cutter's part.

What happened as a result is a more intense concentration by the Obama team to control the message. Until today Ms. Cutter was scheduled to appear on ABC's "This Week." But today it was tweeted that the master of control, David Axelrod, will appear in Cutter's stead. No doubt Cutter's days as deputy campaign manager are numbered, They will keep her on board in a lesser position, so as to continue to control her, but she will never make another public statement on behalf of the campaign. Control the message.

Today there was another brazen exclusion of a reporter from an Obama campaign event. This time it was Michelle Obama who was scheduled to appear at an event in Pennsylvania when a reporter, Dave Davies, was barred from talking to any of the attendees who were waiting to get into the venue. Davies tells the story himself, and he is quite kind in his assessment of the campaign staffers who refused to allow him to talk to the attendees. He's much kinder than I would have been, of course. It's nothing short of a quashing of free speech.

Control the message, no matter what. That's why the Chick-fil-A free-speech patronage last week was so unsettling to the Obama White House and campaign staff. They realized they cannot control those of us who know our rights and refuse to be controlled.

Don't tread on me. That's the message we send to Mr. Obama. He cannot control that.