The Next First Lady 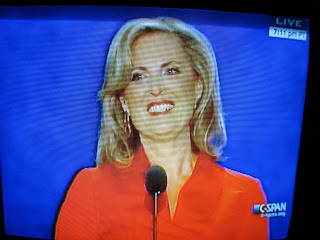 I don't think she is as polished as some would wish. That is endearing though. She is speaking very quickly, and it seems she is really trying to go after the women's vote. Maybe it is overboard -- women are not the be-all-and-end-all of this country. I just hope the people who helped her write her speech did not over do it on the side of patronizing women. Men could be turned off by what she is saying...

Ann tells about getting married at a young age, and she says they lived in a basement apartment. "We ate a lot of pasta and tuna fish," she says. It was tough as he went to business school and law school at the same time ... They now have "five sons and eighteen beautiful grandkids."

I love when she says, "I'm still in love with that boy I met at a high school dance."

And she quotes the Scripture passage, "Give and it shall be given unto you."