Here is a kinda funny story, albeit not so much to the local community in which it happened. It involves a well-meaning woman in her 80s in a village in Spain who attempted a "repair job on a one-of-a-kind 19th century fresco by the Spanish painter Elias Garcia Martinez" that had become aged and/or weathered.

Now, as background, some readers will recall that a few decades ago the Sistine Chapel was restored after nearly five hundred years of collecting dust and grime. Here is how one website that documented the restoration summarizes the project:


In the year 1506, the famous Italian Renaissance [painter] Michelangelo Buonarroti was approached by Pope Julius the Second and offered the commission to the paint the Pope's private chapel, the Sistine Chapel. For four years, 1508 through 1512, Michelangelo worked on 65 foot scaffolding, painting what would eventually become the greatest work of art in the Western world. When it was revealed, the world was inspired and shocked. Nearly five hundred years after it's completion, the ceiling was once again forced into the spotlight.

In 1980, the Vatican announced it's plans to launch a massive cleaning and restoration project on the Sistine Chapel's ceiling frescoes. This intensive civic project cost the Vatican millions of dollars and twelve years. The results were phenomenal. The ceiling was revealed as a vibrantly vivid and passionate work of art. There were those, however, that felt the ceiling's restoration and cleaning had ruined the frescoes. Those that felt that way still protest today. The conservation project launched by the Vatican remains a hot debate topic in the art world to this day. 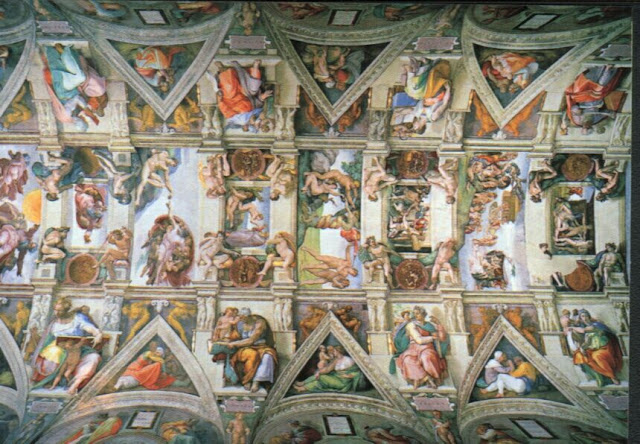 Whatever one may think of the restoration in terms of its historical and artistic values, the before and after pictures prove that the restoration project achieved what it set out to do. The result was a spectacular explosion of colors that had long since lost their vivacity, as these up-close pictures show. 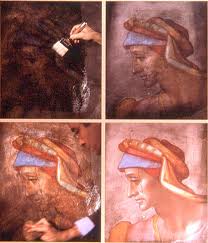 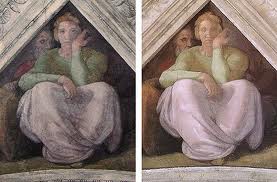 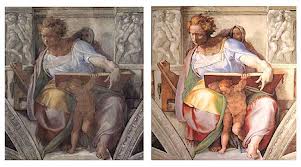 Now back to our story. As an 80-year-old art lover (presumably, since she undertook the restoration project), the elderly woman (whose identity has not been revealed) probably knew of the Sistine Chapel restoration project that had captured the attention of the world in the 1980s-early '90s. She must have thought, "I can do that" ("Yo puedo hacer eso" in Spanish). And she undertook, without permission, to restore the fresco called Ecce Homo, Behold the Man.

Let's just say there is a reason that amateurs should not attempt a project of this nature. The story itself is worth a read, as it has some humorous parts to it. The British version even has some additional details. But the picture of the woman's restoration attempt truly is worth a thousand words in this instance.

Bless her heart, she tried. No one can dispute that. But I have to ask: Is Jesus sticking his tongue out in her final version?

As the news reports explain, an attempt will be made to restore the restoration to its pre-restoration status. And as of now, no charges are being filed against the octogenarian.

However, the part of the story that has yet to be revealed is that the woman has previously attempted to restore several other pieces of art by some other famous Spanish painters. The before and after photos of her previous repair jobs are below.


After further research, the third potential restoration attempt was dismissed when it was shown that The Duchess of Abrantes remained intact, and what was thought to be a restoration attempt by the octogenarian was in truth a Portrait of Marie-Therese Walter with a Garland, by Pablo Picasso.

Posted by Informed Catholic Voter at 10:41 AM