Sometimes I sit in church on Sunday and hear a reading that leaves me wondering. Today was one of those days. It was the second reading from the Second Letter of James.

Come now, you rich, weep and wail over your impending miseries.
Your wealth has rotted away, your clothes have become moth-eaten,
your gold and silver have corroded,
and that corrosion will be a testimony against you;
it will devour your flesh like a fire.
You have stored up treasure for the last days.
Behold, the wages you withheld from the workers
who harvested your fields are crying aloud;
and the cries of the harvesters
have reached the ears of the Lord of hosts.
You have lived on earth in luxury and pleasure;
you have fattened your hearts for the day of slaughter.
You have condemned;
you have murdered the righteous one;
he offers you no resistance.

What this reading made me think about is the "fun" that liberals would have with it if they decided to take it at face value. They could have a heyday with wealthy Mitt Romney and his impending miseries, moth-eaten clothes, and flesh on fire.

Yes, Obama's class warfare--AKA war on wealth--is evident in everything that he does. He does not really hate rich people though. Indeed, without the 1% like Beyonce and Jay-Z and Sarah Jessica Parker and Ashley Judd and J-Lo and Cher and so many other Hollywood elite he would not have the money to fund his monetary needs, his insatiable need for attention, and the lies to cover up his innumerable deficiencies.

So how does Obama, whose record over the last four years is atrocious at best, keep voters on the hook? Sure he is a charmer. Sure, he is the first black president. But that is not how he does it. No, he does it by giving things away. The old adage Never bite the hand that feeds you has become Never vote against the hand that feeds you. So, Obama gives away freebies to the people. What follows is a partial list of the Obama Freebies that keeps the recipients loyal -- and the rest of enslaved by taxes.

Free phones in Cleveland. You have undoubtedly seen the video that surfaced this week, but here it is for good measure.


Free income without federal taxes
Now, the fact that low income people do not pay federal taxes is not Obama's fault. But when Mitt Romney and many others point out that Obama's "fair share" mantra is misnamed at best, and class warfare at the very least, they are labeled as being haters of the poor.

Free college education (for the irresponsible youth)
Obama is constantly hitting college campuses to try to reel in the idealistic younger crowd who think they can change the world. The only thing that has changed is the times-- at least since I was in college. I earned scholarships, and I will freely admit that I received several federal grants for undergraduate school because of the size of my family parents' family. I also worked and paid off my own student loans. For law school I took out student loans, and 17 years after passing the bar exam I am still paying them back. But I have never asked, and I never will ask, for the federal government to pay off or forgive my loans. It's called responsibility. We have tragically failed out youth in that department. If you don't believe me, watch this video. 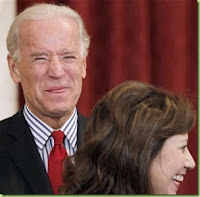 Joe Biden touted this in Florida. He should know all about having colonoscopies. He is full of it. Obama and Biden are trying to scare senior citizens into voting for them. Never mind te TRUTH - that Obamacare cuts $716 million from Medicare. All they can do is tout the freebies. And there are plenty of them.


Free money for the Muslim Brotherhood in Egypt

Never mind that these brutes stormed our embassy in Cairo and burned out American flag earlier this month. The $450 million is less than half of the $1,000,000,000 Obama has promised them. And a huge portion of the Jewish community ignores this blatant slap in the face to Israel. 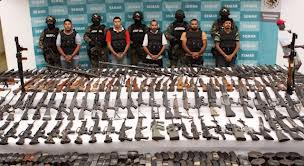 Free food and other goodies from the grocery

The number of people on food stamps SNAP benefits has exploded under Obama. The Administration has been out there trying to drag as many people onto the system as possible. Once they hook you, they count on you not wanting to give up the goods, even if you get a job.

Free birth control, sterilizations, abortafacients (especially for minors and law students)
So much has been written on this travesty, the HHS mandate for all insurance policies, that I will not say more at this time. Suffice it to say, while your child can stay on your insurance until she/he is 27 years old, you have no say in whether that (female) child wants rubbers, birth control pills, the morning-after pill (RU 486 - ask your daughter if she knows what it is), an IUD, an abortion, or to have her tubes tied.


Free healthcare
In addition to the HHS mandate requiring contraceptives, sterilization, and abortafacients, there is nothing in there for men. After Obamacare passed, some uninformed people (the 99%) went to doctors the next day asking for free healthcare. "What? I have to purchase it?" they asked. "Only for a few years," replied Obama. "Soon it will all be free." Then you will find out how expensive free healthcare really is. It'll cost you your life.

Free publicity in mainstream media
The fact that Obama has not done a serious interview with an English-based American (serious) news outlet is no secret. But Obama has not been scarce in the fluff media. Here's a sampling of the free publicity he has garnered. 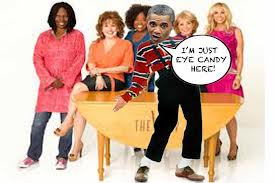 The View 9/25/12
On this particular episode of his many appearances on this worthless morning gabfest, Obama pronounced himself to be "Eye candy." Some say he should have skipped this invitation since he refused to meet with Israeli Prime Minister Netanyahu during that time frame. But hey, Netanyahu obviously does not think Barack is "eye candy," so, given a choice, there's no doubt where he's gonna go.

Obama laments to Matt Lauer that he is not a dictator and, though he would love it, he cannot do things on his own. Darn that separation-of-powers and those checks-and-balances in the Constitution!

Jay Leno program 10/26/11
I'll admit that Obama has not been on Leno recently. Michelle has made an appearance of late, but not Barack. That's because Leno has been a bit critical, if you can call it that. Yes, he has made a few jokes about Obama. I cannot say the same for...

Although I enjoyed his humor 20 years ago, David Letterman has evolved into one of the most shameless Obama-a**-kissers I could ever fathom. I am not wont to even flip past his show when it is on, lest I be accused of watching it for a split second. So I do not fret too much over these late night Obama appearances since only self-loathing liberals really watch his show anymore.

The Pimp with the Limp 9-11-12
All I need to say is that this interview aired on September 11. That same day our Ambassador to Libya died in a terrorist attack at our Embassy in Benghazi. Meanwhile, Obama was swooning and listening to his interview recorded the previous day with the Pimp with a Limp. Yeah. Great publicity. That's our prez.

Mexican reporters come through again on this one. Amid the fluffy interviews he has been doing, Obama thought the Spanish speakers would be pushovers and would boost his image among Hispanics. In addition to Fast and Furious, the interviewers hammered Obama on the immigration laws he promised but failed to deliver. He threw out a few talking points, deflected blame to Republicans, and came out smelling like a dead, molded rose.
Free pass to undocumented young people of voting age

Obama needs their vote, so he said that any illegal alien who is of college age can cry "Dream Act" and be free from deportation. They don't really have to go to college since no one follows up. And they will soon be able to vote for him. He just have to figure out which state has the least checks on voters and will render him the most bang for his buck. Like Fast and Furious did.


Free flags to drape the coffins of servicemen killed in Afghanistan

If your loved one dies in Afghanistan, Obama will give you a free flag. But who is counting? Since 2009 when Obama took office, the media has stopped counting how many have died on Obama's watch. So what of the fact that the U.S. death toll in Afghanistan, Obama's war, hit 2000 this week? Never fear. He just blames it on Bush.

Free pink slips for defense contractors due to budget cuts – but not till after the election
Due to the budget cuts in defense spending that Obama insisted on to offset cuts in Medicare, thousands will lose their jobs on January 1, 2013. But Obama has pleaded with the contractors to not give out pink slips before the November 6 election. He does not want to look bad. <ahem>


Conclusion
﻿﻿﻿Yes, these are a few of the Obama Freebies that voters should consider. And they ought to consider the upcoming election in Venezuela next week also. A young, charismatic businessman is taking the electorate by storm, which has the near-dead Hugo Chavez quaking in his boots.

﻿
﻿
The irony is in the similarity to what is going on in the U.S. In power is an entrenched socialist who gives away free things to the people to keep their support. His administration consists of thugs that keeps people from expressing their real feelings about for whom they will vote. He is being challenged by a wealthy businessman who plans to restore sanity and freedom. ﻿More irony comes in that Capriles, the challenger to Chavez, is Venzuela’s Obama. He draws screaming crowds with his youth, good looks, and magnetic charisma. But, unlike Obama, he is pro-business, like Romney. One report states:

Capriles has made big inroads among the working class where Chavez has his power-base, but still faces suspicions that he is too much of a rich kid and will end Chavez's popular welfare programmes. […]  And then there's the money. A ramping up of spending on social welfare is guaranteed to win votes, while state institutions have barely concealed their use of official resources to support Chavez. Capriles's own, cheaper, campaign relies on donations and fundraising by supporters. Some wealthy Venezuelan businessmen and exiles are also thought to be helping.

Obama, like Chavez, still gets his fix from a fraction of the 1% who want him in power so that they will also be able to maintain a stranglehold over the 99% -- using self-adulation and envy. Obama must sleep really well at night knowing that Hugo Chavez would vote for him if he could. And in Obama's world, he can. All he has to do is send someone to register for him. It's free, after all! 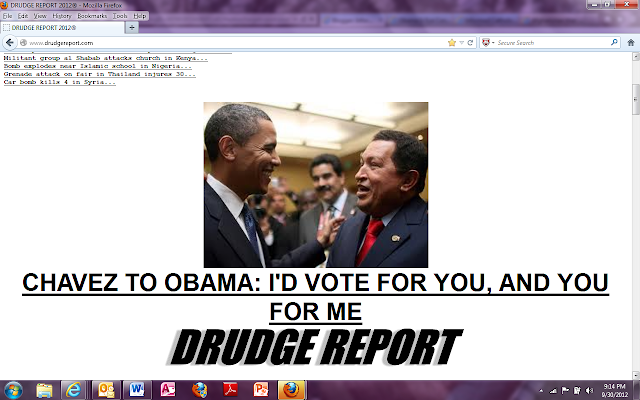