Madonna Exposes Herself for Obama

I have long been opposed to movie stars and musicians and other celebrities using their celebrity status to promote their political views. Sure, they have the right to free speech. But when you consider that there are people who would do whatever some of these "stars" say without assessing whether it is good or bad for them personally, it is reminiscent of those who promoted Hitler and Chavez and Kim Jong Il and other dictators. 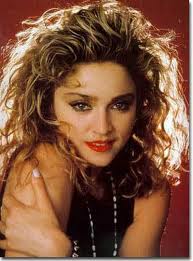 Last night at the Verizon Center in Washington, D.C., Madonna appeared in concert. Remember her? She used to be famous for her cutting-edge songs in the 1980s. She was never one of my favorites, but she knew how to capture an audience with her voice back then. Sure, she as over the top in some of her garb and her antics, but she was young and that was how she got away with it.

Apparently Madonna's talent cannot support her any longer. Indeed, when you watch the videos of her nowadays and turn off the sound, she really looks pathetic up there on stage, kicking and flailing and flexing and exposing herself. She can still make people laugh -- only now they laugh at her now, rather than with her.

A search just now on You Tube of "Madonna Verizon Center" reveals numerous video postings from the concert she did there on September 23. This screen shot shows that, of the 6 videos that you can see listed on the screen here, all posted 23 hours ago (almost a full day), there was 1 view of 1 video. That's it. 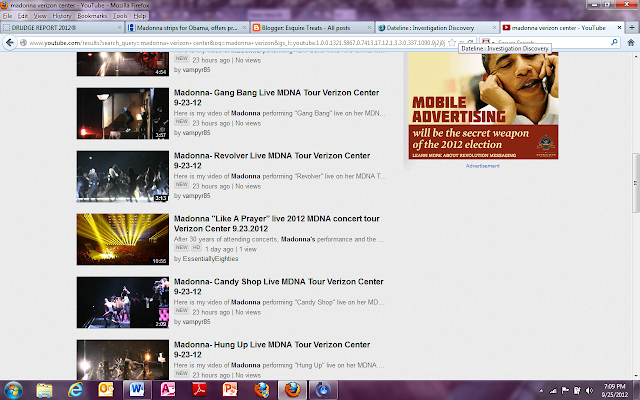 So, back to celebrities pushing their politics on the just-been-flashed. At some of her recent concerts, including the Verizon Center stints, Madonna painted "OBAMA" on her body. Then, last night, in profanity laced interludes, she told the audience to go out and "f--king vote for Obama." Then as she stripped off her shirt, she made the threat that if Obama wins re-election she will strip naked onstage. God forbid we have to endure a 54 year-old has-been trying to appear relevant by exposing her equally irrelevant body. 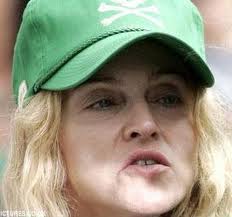 Madonna is a sad woman, hurting inside from self-loathing. Why else would she want everyone else to be as miserable as she is?

And to think there are two precious, adopted children from Africa who call her "Mom." Sadly, they will never know the greatness of America while she runs their lives.