There are several headlines from the Drudge Report tonight that should send chills through every American's heart. 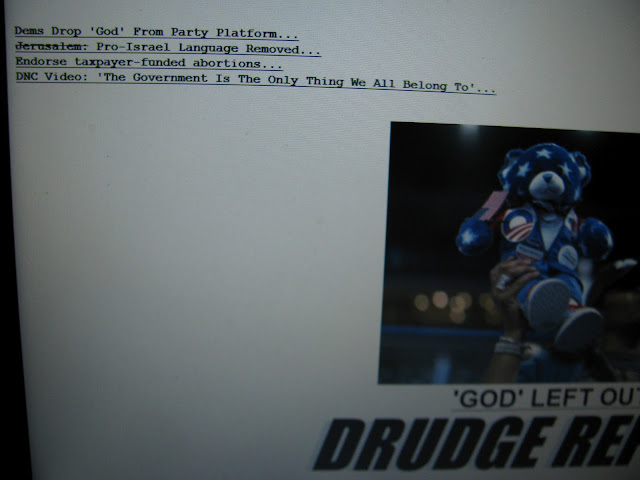 Dick Durbin, Senator from Illinois, appeared on Brett Baier's show tonight, and he was a complete jerk, with all due respect. Baier asked Durbin about the fact that all mention of "God" has been removed form the Democrat party's platform, and the fact that "Jerusalem" has been dropped as the capital of Israel. To say that Durbin is "defensive" is an understatement. He is evasive and aggressive. Durbin cannot answer the question without exposing the complete gutting from the Democrat party's platforms of all reference to God and Jerusalem.

What is left is a full-throated endorsement of abortion on demand on the taxpayers dime and an assertion that the GOVERNMENT is the only thing that holds us together as an American people. Such hogwash!

How can these people look at themselves in the mirror, much less look at the faces of hard-working God-fearing Americans, and feign concern for "the middle class"? The only thing they care about it roping in more Americans to the welfare system. Today it was revealed that more than 46.7 million people are now on food stamps. And that number is growing. The Democrats hope that these people on the public dole will vote for them to keep receiving their benefits.

But the secret is out, and with concerned (scared) Americans crying, "We've had enough, and we're not going to take it any more," we are going to break the cycle of freebies-for-votes in November.

Dick Durbin can continue to hem-and-haw and deflect the truth. But the truth will catch up, and it will set America free. In November.