Tonight was a rather nostalgic night at our house. It started with dinner as we ate, and I reminisced about growing up because of the meal we were having. In fact, it made me think of an old song that I used to like when I was in high school. Through the magic of cyberspace, I can call up the song and post it here so that you can play it as you read the rest of this blog entry. Go ahead, click and listen, and see if this song brings back any memories for you as you continue reading.


Man! That song conjures up images of my high school--literally, the outside area where we used to catch the bus to ride home. It was 1978, so I was a junior, or rising-senior when this song was popular. I was not dating or anything, so the words were not really important, other than the fact that they were talking about memories that you create with someone you care about. I just remember singing the melody and the harmony -- badly -- and not caring if it hurt anyone's ears.

I had never seen this video until just now, and I have to laugh at its simplicity. What's ironic is that the guy is singing about dancing and walking and reminiscing with his girlfriend, but the people in the video are all guys in the band. So he is with his buddies, singing about making memories and reminiscing with his girlfriend. I could not have told you who sang this song before searching for it. My Hubby, on the other hand, will know the band and probably even the names of the band members and the year it was made and how high up the chart it went. He has that kind of memory for music in our younger days. I just knew the words to the songs.

So what delectable cuisine prompted me to start reminiscing tonight? It was the classic, flavorful dish that we had for dinner: Salisbury steak covered with gravy. Yes, the kind you buy frozen like a brick bat in the little tray, covered with plastic. 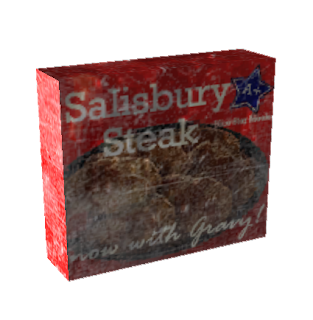 I found them for $2.99 on sale Saturday, so I bought two. They now come with six patties in the tray and a heckuva lot of gravy. I think there had to be more patties in each box during my childhood, because my mom could make one tray serve 11 kids, herself and my dad. Okay, maybe we were not all at the table at once, and Mom may have fixed two trays to serve us all. I cannot recall the details. But I do recall that each of those ground up, smashed patties of beef were mouth-wateringly delectable then, and they still were tonight as well. As kids we we would lay a slice of bread on a plate and center the rectangle of beefy goodness on top, then smother it with that rich, thick, hot brown gravy. It was heavenly! Add some mashed potatoes and canned corn, and there isn't a dish ever made on Top Chef that could touch it!!

What is amazing to me is that both of our teenage girls devoured THREE Salisbury steak patties each tonight! There was not a single piece of beef left in either tray. I fixed rice instead of mashed potatoes, and we had corn on the cob to complete the throw back to my childhood of yore... Ahhhh, it doesn't get much better than that!

Yes, oven-cooked Salisbury steak is unforgettable. It is almost as powerful in my tastebud memory as the incomparable combined taste of Coke and glazed doughnuts. 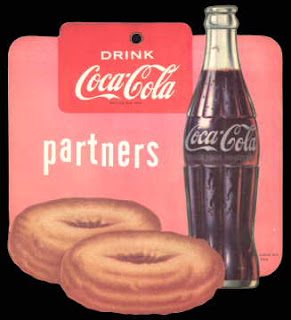 Although I never drink plain Coke anymore (and haven't for over 40 years), when I do accidentally take a sip, it always brings back the memory of pulling weeds for Kendall Gentry down in the Geneva bottoms. In the summer that was the job that we kids had to earn money. As early as age seven or eight, we would be swept into the ranks of the "workers." We got paid, of course, but we lived for that mid-morning break. That's when the liquid sugary goodness of an ice-cold can of Coke fished from the cavernous ice-filled cooler would soothe our parched throats and wash down the melt-in-your-mouth freshness of the white sugar-glazed doughnuts. If I was to go into that memory, we would here all night. My siblings will understand.

NOTE: There are so many things that could not be done now that we did back then:
-Mr. Gentry would be charged with child abuse by the food-police for serving young kids glazed doughnuts and Coke these days;
-Department of Labor child labor laws would never allow us 7 and 8-year-old kids to get up at 6:00 and be in the dew-covered soybean fields by 7:00 a.m. to work for 5 straight hours, with only one break (see aforementioned doughnut/Coke break);
-ATF(and E) would prevent children from utilizing "weapons" like the sharpened hook knives that we used to cut 7' or 8' tall Johnson grass or horseweeds;
-OSHA regulations would forbid allowing children from using the pathway between the soybean rows as a toilet and soybean leaves as TP when nature called;
-DOT would prohibit the transporting of children in the bed of a pickup truck to and from the work-site;
-SEIU would be there demanding we take a vote on unionizing and would insist that we pay union dues to ensure that our less-than-minimum wage pay would be scrubbed in favor of higher wages and fewer kids working.

Still, it is precious memories like these that I want to have in my head when my days on earth are coming to a close. I hope that this is how things end for me. I want to go out hearing my Hubby sing to me, "Hurry don't be late, I can hardly wait, I said to myself when we're old. We'll go dancing in the dark, walking through the park and reminiscing...."

Lastly, a couple more songs from my college days that evoke strong memories and images in my brain:
"Babe" by Styx,
"Keep on Loving You" by REO Speedwagon,
and one more, which has the last verse about reminiscing of sorts. . .
"Comfortably Numb," by Pink Floyd ("When I was a child, I caught a fleeting glimpse, out of the corner of my eye. I turned to look but it was gone, I cannot put my finger on it now, the child is grown, the dream is gone, and I have become comfortably numb.")