Is the Nation In a Funk? 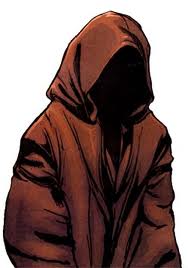 Marian crept into the room with the stealth of a slinking cat, easing the door closed until it latched without a sound. Pulling a loaf of bread from her clandestine bag, she handed it to her hungry grandchildren, who scampered away to rip it apart and devour it liked vultures. Then she gingerly brushed back the frayed hood that covered her head. “We were talking at the Salvation Army soup kitchen today,” she said in a hushed voice to her second oldest daughter. “There was a lady there. She said she thinks people are ready to rise up.” Checking her watch and glancing over her shoulder at the open window, she dropped her voice to a near whisper. “Maybe it’s time,” she continued. “Maybe now we have a chance to overthrow them. I really think she’s in our boat…”

No, this is not a scene from a fictional movie about a despotic government. In reality, it is a modified version of a text message that I got today from my mother. This was her actual message: 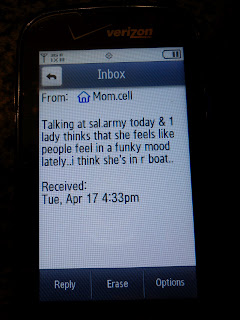 Yes, I admit that I embellished the message a bit. But that scenario is what went through my mind when I read my mom’s message. Why is that? Why am I injecting into everything that happens lately a suspicion-laden, conspiratorial world view? It’s because it is real, at least in MY mind!

Perhaps it has something to do with all of the scandalous news of late—moreso than usual—that has permeated the airwaves. We have the General Services Administration (GSA) and its excessive spending on junkets on the taxpayers’ dime. I have friends that work for this federal agency, and they are extremely frustrated this week. They are hard-working and conscientious, but it is they who have been engaged by management to conduct "damage control" over the unscrupulous actions of othere agency employees. It is my friends who are suffering the inevitable and predictable crack-down that comes when scandal hits -- the proverbial cold turkey after the gluttonous feast. Everything is being cut, even those services and excursions that are necessary for loyal, hard-working agency employees to do their legitimate jobs for the taxpayers.

Scene 2:
While Marian was feeding her starving grandchildren, her son-in-law (SIL) was busy in the government office where he worked tirelessly. He was trying diligently to manage the propaganda machine that was expanding its clenches to envelope the few remaining employees who worked hard to serve the people. All but two of his colleagues were absent that day, involved in either AWS (alternate work schedules) or teleworking (working from home without supervision).

It was a known fact among the employees that no one accounted for the work of those who were not physically present in the office. Indeed, most in-office workers were just as glad to not have the colleagues in the office since actually watching them NOT work at the office was worse than simply knowing they were NOT working at home. 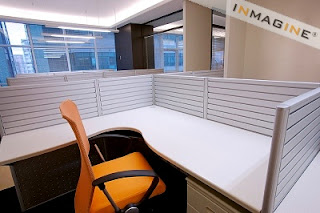 SIL dared not speak a word to his supervisors about his concerns that his colleagues were not actually working while at home or on AWS. He routinely saw the AWS workers arrive late and leave early, especially when they were TDY (temporary duty) in some other location, even if that location was only a few miles from the office. Rumor had it that previous scrupulous employees who had dared speak up had disappeared forever, never to be heard from again. SIL knew that these loyal employees were not the favored ones, the ones who got treated to lavish trips to Vegas and the Big Island. No, those were the Select Few, who were rewarded for their loyalty to the Great One. 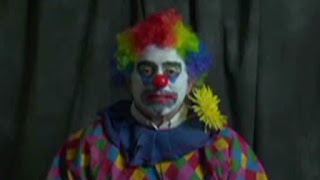 Yes, I know, more embellishing. Maybe my sarcasm and negativity comes from being depressed and infuriated over such ridiculous and divisive statements as that of Louis Farrakhan, who said (in his words) to "Whitey: Unless You Change, Your End Has Come." And he gets away with it.

When you add all of to this the still-evolving story of Secret Service agents and military personnel involved in a sex-for-hire scandal in South America this week while on a mission with the President, the big picture widens even more. When there is flagrant and conscienceless excess in oerall government spending--as we have seen growing for the last 3 years--there is outrageous excess all around in all that the government does. So, it's no wonder that a sense of entitlement and privilege ensues.
And then there is the troubling story today about how many Americans—a record number—are renouncing their U.S. citizenship. How can anyone renounce citizenship to the once greatest country ever? I cannot fathom this. Are these people, like me, completely, utterly and irreversibly disgusted with what is going on in this country? Let’s just say, it’s no accident or coincidence that my renewed passport came in the mail today… 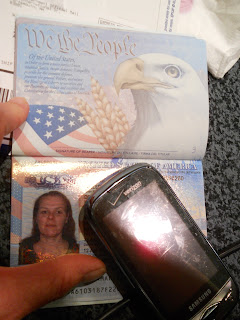 And I am not alone in my concern over a possible re-election of this president. Ted Nugent recently declared, “I will either be dead or in jail” if Obama is re-elected. [Update: Thanks to Debbie Whatserface Schultz, the Secret Service is now involved in investigating Ted Nugent for his comment! Yes, the same Secret Service who is being investigated for its shenanigans in Columbia! In return, Nugent has called Schultz "a sub-human punk!" And you wonder why people are feeling like the country is in a funk? Lord have mercy on us!] 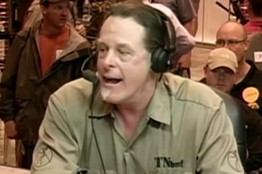 Couple this story about people renouncing their U.S. citizenship with the President’s admission in Columbia today that he is scouting vacation locations to bring Michele on  vacation. Maybe, if we get lucky, there could be a couple more renunciations! And I have the perfect resolution. If he wants his face on a flag, he can have it: 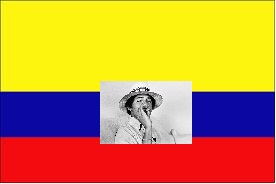 Sorry, Columbia, but you can have him and his hopey changey promise of a pot of gold!