. . . okay, let's stick to baseball. It's an American tradition, born and grown here in the good old U.S. of A. (Abner Doubleday, we owe you a debt of gratitude.) I did not watch much baseball on TV as a kid growing up in Western Kentucky. We played our fair share, but it was too slow to hold our attention for much more than the World Series. I had a stint in the 70s when I was an Oakland A's fan. I don't recall how that came to be, but can surmise that it was their winning three back-to-back World Series in 1972, '73, and '74. I always liked winners (Charlie Sheen, eat your heart out). 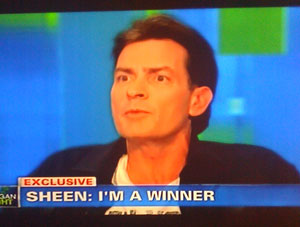 So, the last few years, ever since my return to the Nation's capital and having married a baseball fanatic, I have grown fond of the Washington Nationals. I feel we have a "connection." After all, when I was in school in Ottawa, Ontario a decade ago, the Nats were the Montreal Expos, eh? Even closer to home was a player from Owensboro, KY, who was drafted by the Expos and, after a few years in the minor league, debuted in Montreal a few months before I arrived in Canada. His name was Brad Wilkerson.Wilkerson left Canada the same year I did, 2004, and went on to become the third player to hit three home runs in a single game in 2007 while playing for the Texas Rangers -- another of my favorite teams.

But back to the Nats. Their games are fun to go to because four big-headed presidents are there to greet visitors to the beautiful ballpark that opened a few years ago. The four presidents are the ones on Mount Rushmore. 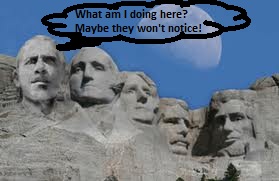 (Note: The day they put a big-headed Obama out there is the last day of my allegiance to the Nats! Not that there is any other kind of Obama. Where have I seen this before?) 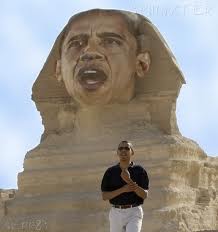 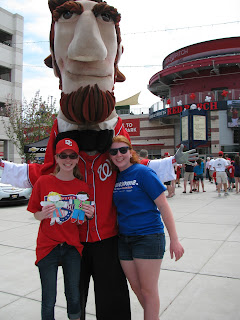 So, upon entering the park, we snapped a photo with the great Republican President, Honest Abe . . . 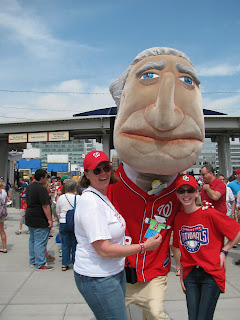 . . . and with the American who most scared the British, our first President and namesake of our nation's Capital, George Washington . . . 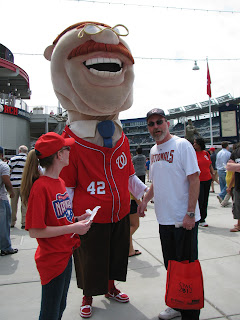 . . . and even the Progressive, more-socialist-than-conservative President, Teddy Roosevelt (who was too busy laughing to pose with Hubby) . . . 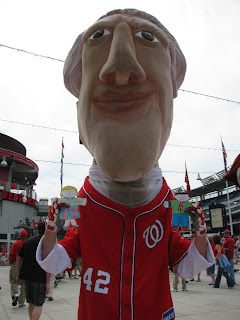 
Great stuff, huh? We had fun anyway. We got Terrance, the iconic Nats cheerleader, to pose with the Flats. 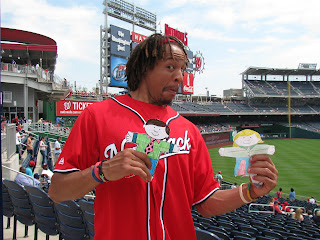 Terrance is known to all Nats fans, as he entertains while he cheers. Note this video from last year . . .


Moving right along, since we were playing Cincinnati, there had to be a token political protester there. What was humorous (or sad, maybe?) was that none of the young people that we were with (from our daughter's crew team) had a clue as to who Pete Rose is. I heard them talking about it (our daughter included) and searching their i-phones to figure out what this dude's sign meant. Finally, we informed them, and they were disappointed it wasn't something scandalous.

The momentary mystery of the day was when we noticed that EVERYONE was wearing the number 42 on their jerseys (notice Teddy and Thomas above). Every player on both teams wore 42, . . . 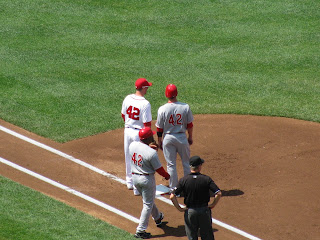 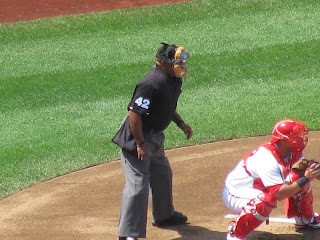 . . . and we finally figured out it was in honor of Jackie Robinson. 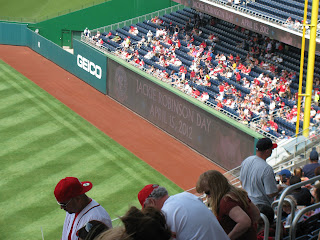 (We thought we were in the Twilight Zone there for a minute or two!)

There was the running of the Presidents (which Teddy has never won) . . . 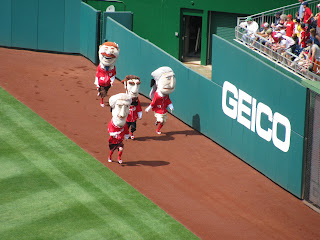 . . . and the shameless commercialism(I had Geico until I got married!). 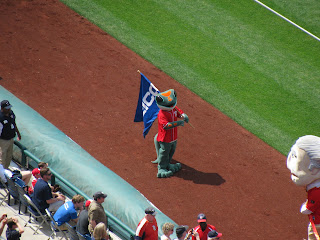 The game was a bit boring, but these two bubble-blowers kept spectators below guessing as to whether Don Ho was making an appearance from above. 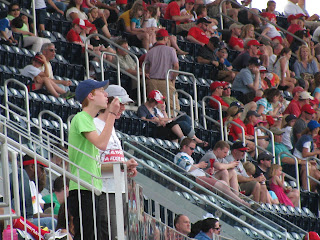 In the end, the Nats lost to the Reds, but won the overall 4-game series 3-1. And the team honored my family by putting our name on a construction crane over the ballpark! I love those Nats!! 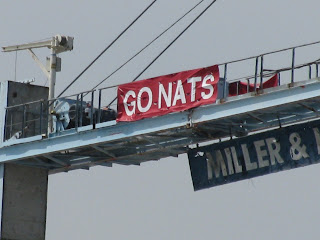 Posted by Informed Catholic Voter at 11:13 AM