A few years ago my husband and I frequented a diner in town that had a row of newspaper boxes outside. You've seen them -- there are 8 or 10 of them with various free papers and a few that actually require you to pay for them. When we walked by, we always grabbed a copy of The Onion, which is a satirical publication that ripped stories from the headlines and gave them a humorous (sometimes maniacal) twist. Naturally, the writers have a very liberal sense of humor, but on occasion it is funny.

I remember one front-page story four years ago that reported about a man who kept going around asking everyone for change. It was a spoof of Obama -- one of the few I ever saw. Here is an excerpt from the March 19, 2008 edition:


CHICAGO—According to witnesses, a loud black man approached a crowd of some 4,000 strangers in downtown Chicago Tuesday and made repeated demands for change.

"The time for change is now," said the black guy, yelling at everyone within earshot for 20 straight minutes, practically begging America for change. "The need for change is stronger and more urgent than ever before. And only you—the people standing here today, and indeed all the people of this great nation—only you can deliver this change."

It is estimated that, to date, the black man has asked every single person in the United States for change.

"I've already seen this guy four times today," Chicago-area ad salesman Blake Gordon said. "Every time, it's the same exact spiel. 'I need change.' 'I want change.' Why's he so eager for all this change? What's he going to do with it, anyway?"

Then, a couple of years ago, the print version of The Onion went the way of most hard-copy publications these days -- into oblivion. Now all they have left is a website where they publish their satire. I do not check the website anymore, but this story came to my attention yesterday. Although it is meant to be a satirical look at the issue of abortion and the pro-life opposition to it, it is eerily accurate. That is, although the classroom scenario in the story will never happen, if it did, this is exactly how sixth graders would react.

I am printing screen captures of the web page with the story on it so you can see how it is presented. By clicking on each picture, it should enlarge enough for you to be able to read the story. If not, the link is embedded here. 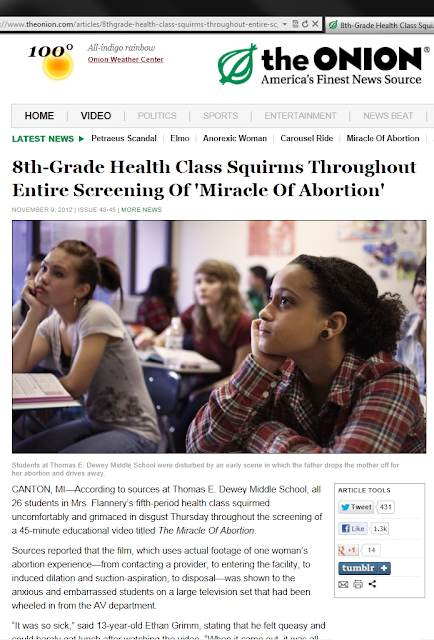 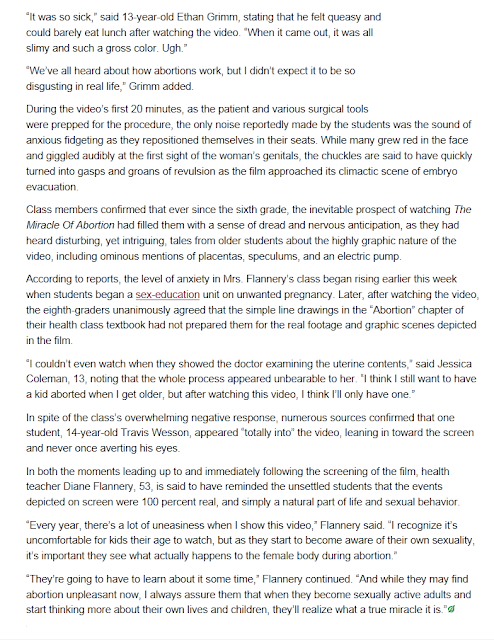 As for the REAL news and how abortion is being supported by our tax dollars, these two REAL stories about the fraud that Planned Parenthood has perpetrated on numerous states is enough to make your blood boil.

Posted by Informed Catholic Voter at 9:44 AM