It's funny how things come together and how events of the past are so revealing of the actions of the present.

Last month I wrote about attorney Gloria Allred and her (at the time) mysterious insertion of herself into the presidential election. She lurked in the background, threatening to come forward with an October-surprise client who would turn the presidential race on its head. I wrote repeatedly on my other blog about her antics-- how she committed professional malpractice by failing to file the proper motion for her client and ended up with egg on her face, but that's neither here nor there for now.

What is more important from my earlier blog post is the pattern that I outlined with regard to how Barack Obama has managed to bully his way to winning elections to various political offices. Recall how he sleazily ousted his opponents from the Illinois State Senate race back in the 1990s to claim his first political victory. Then, in 2004, he employed equally despicable tactics to win the Illinois federal Senate seat. In short, his minions dug up dirt on Obama's opponents and threatened to reveal it if they did not exit the respective races. So he never won on his merits -- he won by flinging dirt and threatening to embarrass people who were connected to the other candidates. 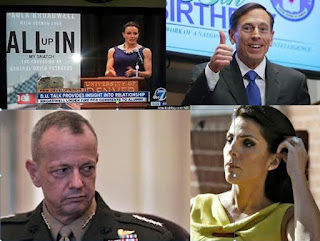 The reason I bring this up again is because the Petraeus puzzle pieces are now coming together, and the picture that they reveal is not a pretty picture of OBAMA. I strongly suspect that one of the women involved in the Petraeus/Allen scandal (Broadwell or Kelley) was seeking Gloria Allred's assistance back in October. Thinking that one or both of these Generals would be linked to the conservative or Republican camps and thus would hurt Romney, Allred was going to bring her "victim-client" forward and have her cry in front of the cameras. Then she would try to tie the whole sordid affair to Romney.

Instead, after meeting Obama at one of his fundraisers and telling him of what she planned to do, Obama dissuaded Allred from doing that. That's because he already knew about the affair and had other plans in the pipeline. Instead, he helped Allred come up with another client -- the ex-wife of Staples founder Tom Stemberg -- so she could save face and manufacture a ridiculous claim that Romney lied twenty years earlier in court testimony. That whole Maureen Sullivan story was the most epic of fails, and made Allred look like an idiot. I could not figure out why Allred had hyped this ridiculous story. Now it is clear to me what happened. Obama deflected her from ruining the plan he was devising.

Yes, Obama and his puppet(eer)s came up with a better way to exploit General Petraeus. Last night, Charles Krauthamer started painting the picture, and this morning it became clear for me. Here is part of what Krauthamer explained on Fox News last night.

The story is almost so incredible that Obama knew no one would believe it if the truth came out. He has relied on the faithful media for five years now to cover up for them, and that is what continues to happen.

Here is the basic story. Obama knew he was losing support and that Romney had overtaken him in the polls. Since he could find no dirt on squeaky-clean Mitt Romney--like a divorce or an affair or a drunk-driving charge like he did in his Illinois state and federal races--he decided to go one better. He would kill two-birds with one stone. Obama knew about the Petraeus-Broadwell affair months ago. So, he blackmailed Petraeus after the 9-11 Benghazi attacks and told him to tow the White House line and support their false narrative (that a video prompted the attack on the Libyan embassy and the killing of Ambassador Stevens and three other Americans). In order to save his job at the CIA, his reputation, his marriage (aka his pension), and himself from possibly a court-martial for adultery, Petraeus agreed to lie for Obama. That got Obama through the lukewarm media interrogation about the 9-11 attack when it became clear that the video was NOT the reason for the embassy deaths but rather it was a planned terrorist attack, pure and simple. Obama could point to General Petraeus and ask, "Why would a four-star General lie?"

Now we know why Petraeus lied. (At least he has agreed to testify on Friday. Stay tuned.)

Now that the election went Obama's way, he has no more need for Petraeus. Indeed, Democrats have not liked him since the New York Times ran the "General Betray-us" ad years ago during the  Bush Administration. But they HAD to keep him on-board during Obama's first term in order for Obama to have any hope to win a second term -- he was their foreign policy patsy ace in the hole. With the election over, Obama could throw him overboard. And that is what happened this week. The White House lifted the veil and let the FBI and CIA and media all know about the Petraeus affair. Down falls not just one conservative General, but two. And the country's attention, including Congress, is diverted away from the shady election and allegations of fraud and petitions by state's to secede from the Union. The attention is all on a man and a woman and the disaster that they have made of so many loved ones' lives, all thanks to Obama, his thirst for power, glory and riches, and his love of Saul Alinsky tactics.

And the biggest loser is our country.

P.S. Don't be surprised when  Gloria Allred pops up (again) in the midst of all this sleaze and sensationalism.