I have written in another blog about an artist who intentionally offends innumerable Christians around the world. I am talking about the man who photographed and displays what he has dubbed the "Piss Christ." It is a photo of a crucifix immersed in urine, and the artist has displayed it around the world. Serrano's displays have been attacked in at least two locations by people distraught over the man's bullying intentions.

It obviously is the shock value that an artist of this type is going for. And liberals defend the man when Christians decry both the blasphemous photo and the act of immersing in urine a sacramental that Catholics hold sacred. Would this be allowed if it was a photo of Muhammad immersed in urine? Unquestionably NO. Such a display would NEVER be allowed. And what if it was Barack Obama in the display? After all, he has been called "our Lord and Savior" by Jamie Foxx, and he has been "artistically" depicted as crucified in a painting called "The Truth" by its New York painter.


So why is it, then that liberals are not as tolerant of the creative aspirations of artists when the purpose of their work is show Barack Obama in similar fashion? I am speaking particularly of the recent rage that was unleashed when Glenn Beck created a work of art with the intention to auction it for charity. Beck's creation, which he dubbed "Obama in Pee Pee," is both art and satire, a combination that works well when produced by liberal actors, comedians, artists, and mediaites, but is not allowed for conservatives. 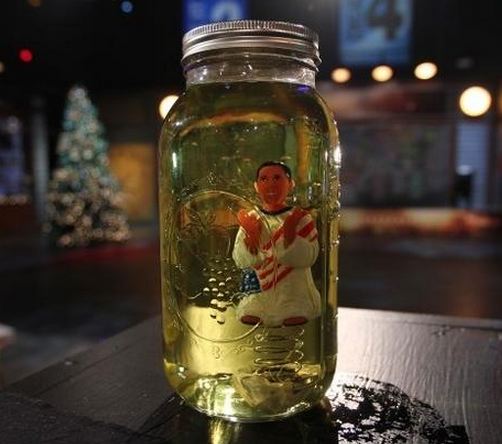 Liberals have gone ballistic on social media sites since Beck unveiled his masterful creation. (Hey, Libs, it's not real urine, you know. It's beer. So calm down.) Beck put the item on eBay last night, and bids skyrocket overnight to $11,300. Then, the e-censors stepped in, and eBay removed the item from the auction block -- from the website all together. Citing the company's prohibition against the sale of bodily fluid, or in this case since it is  not real urine, anything that you call a bodily fluid, eBay nixed the sale. Indeed, they warned Beck he better not re-list it either, and they told him he had to take a tutorial before he could ever sell anything else on eBay. So there, Glenn Beck. Take that.

Naturally, the eBay scrapping has made the value of the Obama in Pee Pee to go through the roof. Next week it will be on display in the Louvre, then at St. Peter's Basilica. I think Michael Moore should buy it. Or better yet, maybe I will buy it and give it as a gift to @PuddleRowdine who wrote on Twitter in response to Michael Moore's tweet: "@ MMFlint  Glen Beck is a traitor, and doing this to ANY presidents image is treason, he should be dealt with as such, citizenship revoked." (Something tells me that by "ANY presidents" what Puddle means is "ANY presidents-as-long-as-it's-Obama.")

You gotta love the intolerance of the insane Obamabot liberals ... or not. Piss Pee pee on 'em.