Booster Shots: Two Romneys and a McDonnell Keep Me Going

I remember as a kid when Mom would say "It's time for a booster shot for _______ (fill in the blank with the name of one of her 11 children)." I never really understood booster shots, until I was an adult. It is that little extra dose that keeps you going and protects you from fatigue or illness.

I got a "booster shot" today. I went out to Fairfax, the heart of Northern Virginia, with the intention of attending a "rally" with Ben and Tagg Romney. As I am wont to do, I arrived an hour and 15 minutes early to make sure I found the place. I was put to work making calls to undecided voters.


There were dozens of people waiting for a turn on the phones. I did not want to give up my seat! So, I made calls until we were told the "stars" had arrived. Out to the parking lot we went.

When the caravan of mostly black SUVs paraded in, the first recognizable figure to show his face was Governor Bob McDonnell. 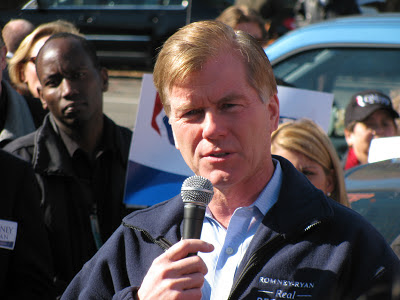 Then Ben Romney, the 4th son, spoke to the crowd from his heart about lessons he learned from his parent, Mitt and Ann. He is known as the only blond Romney child, and he is doing his residency as a doctor in Massachusetts. 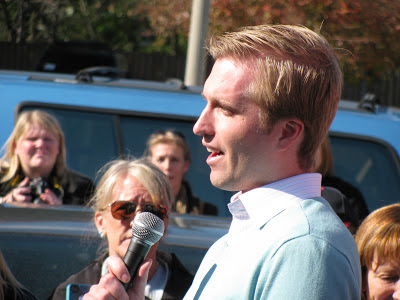 Then came son #1, Tagg, who joked about how he got his unique name. He is quite a funny guy. He has six children, God love him and his wife. She was there with him today, with a couple of their kids. 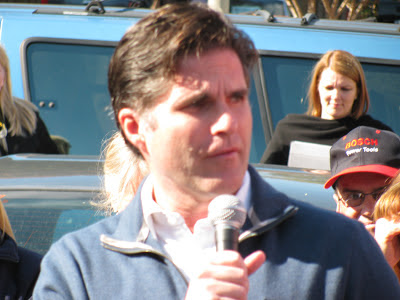 After the men spoke for about 20 minutes, we had the chance to get them to sign posters and take pictures. So, I took advantage of he one-on-one time.

I left the rally revved up, ready to work the polls on Tuesday. I am considering going to the final rally in Virginia tomorrow -- at the George Mason University Patriot Center -- with THE Romney, the next President of the United States, Mitt.

After I left the gathering, I went to my new parish where they are having continuous exposition of the Blessed Sacrament from this afternoon through Tuesday evening. I spent an hour in prayer, asking God to enlighten Catholic voters so that they vote not for what is best for themselves, but for what is best of the Country, the unborn lives that are being brutally exterminated, and for the common good. There were more than a dozen people in prayer, and every hour is covered between now and 7:00 Tuesday night when the polls close.