When you look at a stranger, do you ever think...


. . . I wonder what that person does for fun? Or maybe, I wonder if that person is carrying a gun. My husband teases me because I watch a lot of programs on Discovery ID channel. You know, the channel that shows 24 hours a day of women killing their spouses or getting killed by their spouses. He jokes that he has to sleep with one eye open at night just to be safe. With all that bombardment of murder and evil, I am definitely more cautious and suspicious of people around me.

So it is a little surprising what happened yesterday morning. First, back up to the previous night -- as I was blogging. I saw a certain headline on a website, but I brushed past it without interest. Then yesterday morning my co-worker asked me about the story that I had brushed past -- about a TSA agent who had been arrested for running a prostitution ring in a hotel a block from our office and next door to my gym where I go every weekday morning! Yikes! was my immediate reaction. I guess the online ad for the hotel as "the place to meet" is an understatement.


Once again, such stories bring me to a moment of self-reflection. Am I just naive when it comes to criminal activity? Am I dismissive that times are tough and people do desperate things for a little money?

For good or for bad, I am not very trusting when it comes to my gym. I lock my locker diligently, even though probably half the female patrons just throw their stuff in lockers and don't lock them; cell phones, purses, clothes, etc., all remain visible (and tempting) to anyone who opens a locker to throw their stuff in. Why do they ignore the printed signs that the management posted, warning them against such indiscretion? Why do they ignore the fact that the front desk will give them a key to a small locker in which to put their valuables? Will they complain if something gets stolen or accept personal responsibility for their own complicity?

As silly as it may sound, I find myself annoyed with people who do not lock up their goods. They are tempting others when they leave their stuff available for pilfering. Lead us not into temptation. Do they just not care? Are they just all-trusting? Will they scream and protest loudly if their stuff gets taken? It's beyond me. Don't they watch Discovery ID?
﻿﻿
But back to the prostitution ring and the hotel next door. I have never been inside the hotel, but I know it to be a central location for out-of-town visitors, frequently used by youth groups that come here to the DC metro area on vacation. It is only a couple of blocks from the Silver Spring Metro station.
﻿

Just this morning, as I turned into the roadway next to the now-infamous hotel at 6:15 to go to my parking garage that the hotel shares with the County, I saw half a dozen commercial buses parked outside the hotel, loading up with dozens of young people, preparing to depart. Undoubtedly they were here for Spring Break and are now heading home. Although the incident in the news story actually occurred in February, it just hit the local news this week, while those young people were staying at that hotel. What a story they can add to their repertoire to tell their families when they get home. And they were right down the street from the Discovery building. 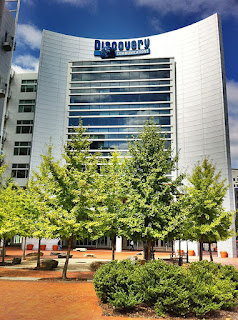 Let me just say that Silver Spring itself is not a bad place. Yes, it is located in the People's Republic of Maryland, in the liberal bastion of Montgomery County (thank goodness my husband rescued me and moved me to Virginia when we married). And yes, it was one of the locations for the Beltway sniper shootings 10 years ago. And it was where the crazy guy held the Discovery Building hostage a year and a half ago and ended up dead. Yes, the Discovery building where the Discovery ID programming comes from.

Yes, Silver Spring is not all bad. I lived here for three years in the 1980s. I got my first teaching job, as well as my second teaching job, here in Catholic Schools (St. Michael and St. John the Baptist). And I can attest that Silver Spring has some lovely trees.

What really saddens me is that the state of Maryland was named after Mary, the Mother of God. Unfortunately, I think that if she came here to walk the streets of some of the cities in her nominal state, she may not want her name associated with it. I know that will irk some people. But there is still free speech in the PRoM.

I guess I really should watch over my shoulder when I walk to my car this afternoon. I don't want to become the subject of a Discovery ID program. . . .