Round 2 with Rocky the Raccoon

Sometimes stories end, and sometimes they linger. Yesterday I got home from the office and had a few minutes before the rest of the clan got home. We had plans to go out and celebrate a birthday meal for our one-day-shy-of-17-years daughter. I took a few minutes to unwind by walking through the yard to see the beautiful flowers that are gracing the landscape in all their glory. Then I went inside and thought I would spend a few minutes preparing for my next blog post.

I had barely logged onto the internet when I heard it. The sound is familiar by now. And the source too. He's baaaaaaack. Luckily I had my camera laying close by this time, although I was not sure whether the batteries would be able to power the flash. I had just used the camera the previous day to take some photos that you'll see in a later blog, and the camera had indicated the batteries were dead. Usually though I can get a couple more shots out of the batteries if they sit a while. I had not bought new batteries yet since I did not know I would need the camera so soon.

As I started up the steps to our master bedroom, the front door opened and in bounded our 13 year-old. "Hello!" she excitedly pronounced. Without really looking at her, I motioned with my finger over my lips and said in my whisper-shout voice, "He's back. . . ," and continued up the steps. I yanked open my husband's closet door that hides the clandestine opening into the nether regions of our attic. Pushing his shirts aside, I labored to lift myself up to the mid-torso high shelf that allows access to the miniature door. (Geez, what a chore it has become to do those things that came so naturally as a kid!)

Making sure that my camera was turned on and within arms-length, I noticed that my husband had arrived in our room, as had our daughter. "Flashlight," I ordered, the way a surgeon would order his surgical assistant. "Flashlight," repeated our daughter to her dad, and he passed along the one that was laying on his nightstand. (Thank goodness I had ordered those six little LED flashlights from Daily Steals last December -- we have one on almost every room now.)

With flashlight in mouth (gross, I know, but necessary so my hands could be free to perform their duties), I unlatched the door and swung it open into the darkness of the attic. I quickly shifted the camera into place and snapped a picture without aiming. (Think Jody Foster in Silence of the Lambs, firing into the dark when Buffalo Bill was reaching for her in his night-vision goggles.) 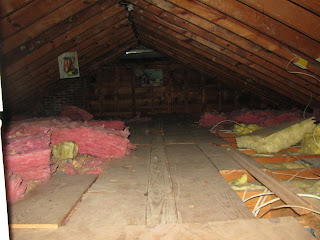 After the bright flash subsided, I hit the button that allows you to review the picture you just took. "Is it there?" asked Hubby. "I can't tell," I said. So I aimed in the direction where we had seen the critter a few nights earlier and fired off another shot -- luckily, the camera flash was holding out. 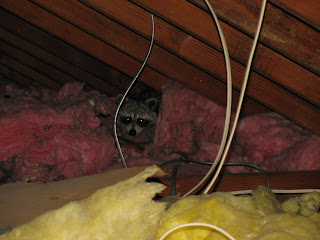 Voila! Busted! Rocky was there, glaring back, trying to remain hidden in the insulation. (Did he not know that stuff has fiberglass in it? Guess not.) I snapped a couple more pics, for evidentiary purposes. 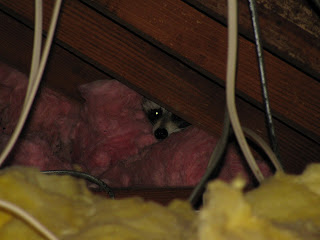 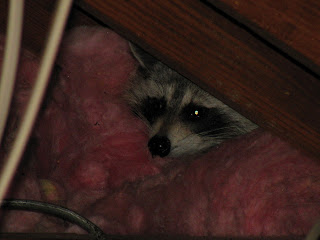 Rocky did not look at all happy to be disturbed. The glint in his eyes was a dead giveaway.

Since we were on a tight schedule and needed to get on the road to the restaurant, I decided to act decisively to rid our abode of this unwanted creature. "Radio from the garage," I ordered. Dad went running. "And extension cord," I added. Daughter ran after father to convey that additional command. While I waited for them to retrieve the weapons, I turned back to the black hole and shone the light.

Nothing. He was gone from sight.

I shone the light around to see if he had moved toward the vent slats where we suspect he had gained entry. No sign of him. He must have burrowed back into the fiberglass. It was the old "I-can't-see-you-so-you-can't-see-me" routine. And he was right. I could not see him.

I was surprised at the speed with which my minions retrieved the weapons of choice. I hurriedly plugged the cord of the boom-box into the extension cord. When Hubby plugged it in, I turned the volume up and adjusted the station-finder knob. I thought about looking for WMAL - the local station that broadcasts Rush Limbaugh -- might as well let the critter get educated before he moved out. But it was past time for Rush -- Mark Levin was on--but the radio was on FM rather than AM. I simply made sure there was noise coming out -- it was tuned between stations so it sounded something like the demon voices that came out of Linda Blair in The Exorcist. I set the radio in place, pumped up the volume, and closed the door.

The Arlington Animal Welfare League website had said that raccoons don't like loud noise. I could vouch for the fact that when we had banged heavily on the ceiling on previous occasions when he heard Rocky above, the scratching had stopped. So I believed this to be true. Rocky would have to decide whether to stay or go. Meanwhile we were off to the restaurant.

To make a long story short (don't you hate it when people say that and then go on with the long story?), we got home around 10:00 p.m. and immediately headed to the attic door to see if there were any developments. The gibberish was still emanating from the boombox in the attic, so Rocky apparently had not sought to destroy the weapon of mass destruction. I opened the door slowly. (I forgot to mention that in the earlier attempt to ready the defense shield that evening we had discovered a light switch right inside the mini-door, and had left the light on also when we departed for dinner.) I silenced the noise-maker, listened and looked around the attic. Nothing.

Now was the time for physical infiltration. With some effort--and equal determination--I hoisted myself up into the attic. "Be careful," shouted Hubby from down below. I stepped gingerly over to where Rocky had last been visible. The insulation was gone from between two rafters/joists, exposing the plasterboard or drywall or whatever the ceiling to the kitchen/dining room below is called from up above. No Rocky.

I sidled over to the vented slats, visible in the first picture posted above. Although not a really large opening, one of the lower slats was obviously askew and was detached from its moorings. "If he can get his head in, he can get the rest of his body in." The haunting words of Thumbelina-from-Animal-Control on the phone two nights earlier came back to me. "I need wire or string to tie up this broken slat," I called out to the waiting Dynamic Duo, faces framed in the mini-doorway. Off trundled Hubby to oblige me.

Moments later he was back, and I stepped toward the mini-door to retrieve the items of mass repair. "I couldn't find string or wire," he said (which I interpreted as "I didn't look for string or wire"), "but try this tape." I thought to myself, "Duct tape will work," and I reached out my hand. What he offered instead was a roll of blue painter's tape. (We have tons of blue painter's tape, so its presence did not surprise me, but to repair a dislodged metal slat?) Noticing the look on my face (the WHAT?-look), Hubby said I should just use this tape to tack up the slat, and we could see if Rocky tries to break through it. Hmmm. Actually, a better plan than what I had envisioned, I must admit.

So, I quickly tore off several strips of blue tape and applied them strategically to hold the slat in place. Mission accomplished. Off to bed we all went.

This morning I got up at my 5:30 rising time and headed off to start the day at the gym. I arrived at the office at 8:00, and was pecking away at my keyboard when an email came through in my work inbox around 8:50. Hubby sent me a picture that he took before leaving home this morning. 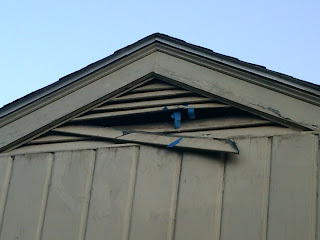 The slat that was drooping only a couple of inches is now almost completely severed from its moorings. Rocky must have been really ticked off!

Hubby: See picture of house vent -- he must have left during the night!

Me: Or came back in!!!!! Wow! We got the evidence. I feel like a reporter! More fodder for by blog!

Me: Did you leave the slat hanging that way? We will need to fix it this weekend, whether or not Rocky is still there! And we should cover the opening to the other part of the attic too so it cannot go over to where our stuff is stored.

Hubby: So I have a "honey-do-list"! I have some screen in the garage and a heavy duty stapler.  I hate to leave "Rocky the Raccoon" in the attic - - we might have to call in the "mortician"

Me: I suspect you are right, that he went OUT. But, we won’t be sure until we inspect. I think we can sprinkle some flour on the floor and assess whether his pawprints are heading out or in… He must have been hiding last night when I was taping up the vent slat… We’ll get creative so we can tell what the rascal is up to!!

PETA and SPCA Disclaimer: No raccoons were injured in the attempted extermination described herein. Feel free to try this at home.
Posted by Unknown at 2:24 PM