These days in America we hear a lot of talk about red states and blue states. If you are talking about politics, I have no hesitation admitting that I am fire-engine red. On voting day I wear red, even if I am working at the polls. And, on Christmas day, 9 times out of 10 I wear red to Mass.

But, I was born and raised in the Bluegrass state of Kentucky. And there are some occasions in the life of almost every Kentuckian when you never wear red. If you haven’t guessed it, it has to do with basketball. We Kentuckians take our basketball very seriously. If you are born and raised in the Bluegrass state, chances are extremely high that you grew up with a manic devotion to the Kentucky Wildcats. I know that I did, and that unshakeable loyalty is so ingrained in me and most of my siblings that we “bleed blue.”

My siblings and I grew up listening to Caywood Ledford calling Wildcat games on the radio. If the game was not on television, which was often the case, we would huddle near the radio to listen to the game being called. (We would get furious when the local TV station—which was actually located in my hometown of Henderson, KY, but had call letters as an Evansville, IN, station across the Ohio River—would broadcast Purdue Boilermaker games instead of UK’s game. But I digress.) Often if the Cats’ game WAS on TV, my dad would have the game playing on our one TV but would have his earplug in—the old type that consisted of a 10 foot cord and one earbud jammed into your ear—so he could hear Caywood delivering a tinny rendition of the game’s play-by-play.

So, back to the color wars. We UK fans can never wear red on two occasions:
-when UK plays Indiana and
-when UK plays Louisville.
This season we played Indiana twice. The first time (she says, biting her lower lip until the blue blood flows) the Hoosiers eked out a victory on a heart-breaking last-second shot, handing our Cats their first loss of the season. The second time brought sweet revenge in the NCAA tournament, when we met in Round 4. It wasn’t even a game! The Cats smoked ‘em. (I have to dish out the trash talk since some of my readers are Hoosiers or at least LIVE in the red state.)

Which brings me to the second opponent that wears red. That would be the Cardinals of Louisville (pronounced lu-vul). Now, I always liked to watch Louisville when Denny Crum was coach in the 70s, 80s, and 90s. But many Kentucky fans think that the two are mutually exclusive --you cannot be both a Wildcat fan and a Cardinal fan. I could go into a loooooong discussion of the betrayal that many Kentuckians feel over Rick Pitino going from UK to U of L – forgetting that he was in Boston for several years in between and not caring that he wanted to come back to our beautiful Bluegrass state. [More digression.]

This season UK played Louisville in the regular season, and the Cats clobbered the Cards in that game. But, this weekend we are gearing up for what is being hailed as another Dream Game. (The first Dream Game between these two teams was in 1983 in the NCAA tournament Mideast Regional, after decades of no-contact between the two teams. You'll have to Google it if you do not know who won. Or click here, then here.) Anyway, these bitter in-state rivals will meet in the NCAA tournament, in the Final Four in New Orleans, this coming Saturday. There will be a lot of nail-biting and trash talk in the Bluegrass (not Redgrass) state on Saturday. But in the end, one Kentucky team will end up playing for the national championship. And one set of fans will be in mourning.

A Cardinal fan posts these wallpapers on his website: 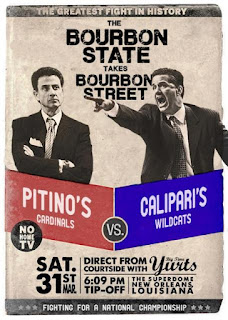 Living outside of Kentucky, I have a “luxury” that most in-staters don’t. Some will think I am crazy and traitorous for it, but my hubby and I do own and wear a T-shirt, a sweatshirt, and a ballcap with “Louisville” emblazoned on them. We also have the same apparel items with the Wildcats logos on them. At times we purposefully wear opposite teams when we go out. Usually no one notices, but there have been a few occasions where savvy sports fans notice the clashing attire. It makes for interesting conversation.

Even so, I still consider myself wholeheartedly, unabashedly, and incontrovertibly a diehard UK Wildcat fan. And I will profess my love for the Wildcats until I am blue in the face. (By the way, there is a family in Kentucky where some members are literally blue in the face! Why do I keep getting distracted?)

So, what is all this coming down to? Do I have a point? Well, although the good-natured rivalry is a point in itself, I do have something else to relate to this. Understand that I have 3 in-laws who are from southern Indiana. So, although we tease back and forth (like the one about how Hoosiers keep throwing stink bombs across the river at Kentuckians and Kentuckians keep lighting them and throwing them back), we familial rivals have an understanding, and we know when to draw the line. Pushing each other’s buttons is one thing, but we never rarely let it go beyond the good-natured rivalry. Society in general should take a lesson from this -- we are in it together, and sometimes you have to suck up the losses and look ahead to getting revenge in the near future.

This Saturday, the Bluegrass state (outside the greater Louisville area, which the mayor has proclaimed to be Cardinal Red Day) and my Virginia household will be BLUE inside and out. And I hope the red team is the one that ends up blue in the end.

My final point is this: as much as I love my Kentucky Wildcats, and despite bleeding blue, I hope and pray that the Bluegrass state of Kentucky goes RED in the November presidential election. We are a red, RIGHT and blue country. We can't afford to be blue on November 6.
Posted by Informed Catholic Voter at 10:23 PM