An hour or so ago I came across a survey on the Washington Post website. SInce the Supreme Court starts hearings today on the health care law, the survey asked readers to vote on whether Obamacare is constitutional or not. The numbers in the pie chart tally clearly showed the vast, overwhelming number of people responding believe Obamacare to be unconstitutional. BUT, when you voted "No, the requirement is unconstitutional," it would pop up with "You voted Yes" and asked you to leave a comment. SO the comments were all being listed under the "YES it is constitutional" side, making it look like only supporters were posting. It was also easy to see that the names of those in support were made up by one or two people to make it look like a lot of people were responding in favor of the law -- most of them have a few initials and then a couple of numbers, like "asd345" or some such combination. And they spouted off talking points that the liberals always use to defend Obamamcare.

Screenshot: This is what you see before you cast your vote. The question asked: Is the law's health insurance requirement constitutional? 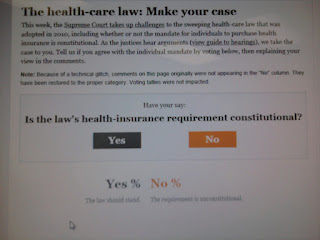 When you clicked on No, it tallied it correctly, but the message that came up said, "You voted YES on the issue of whether the health care insurance requirement is constiutional." I you commented, it went into the column under the YES response.

Then I went to a meeting for 45 minutes, and when I came back, the WaPo website had corrected the "glitch" so that the "You voted YES" message is gone and the NO posts are now appearing on the correct side -- namely the NO side (97% saying it is unconstitutional). You know they have to pulling their hair out at the WaPo HQ of their website! (35,761 say unconsitutional, 1600 say constitutional as of 11:01 a.m.)

This screen shot shows how they changed the pop-up message and added the little "Oops" message about the glitch being fixed. 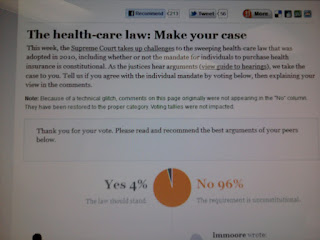 Alert viewers did not let them get away with it! Way to go, smart, watchful people (and Drudge Report) for keeping the mainstream media accountable!

Now, let's hope and pray that SCOTUS agrees with the vast majority of Americans who know that the health care law is unconstitutional and must be defeated!
Posted by Informed Catholic Voter at 11:41 AM