So, the last few weeks we have had an uninvited house guest making itself at home in our attic. My wonderful husband is blissfully "unawares" since he has pretty significant hearing impairment and never heard the sounds emanating from our upper regions. A few weeks ago we were both sitting in the living room minding our respective business, and I heard an ungodly racket in the kitchen. I crept around the corner like I was sneaking up on a burglar, and it did not take a detective to trace the desperate-sounding noise to the ceiling above the kitchen. Something was there.

"Pssst!" I called to my husband, trying not to make any noise that would disturb the critter up above. Hubby did not hear me. "PSSST!" I got louder. He sat with his nose buried in ESPN magazine -- the one that I had ordered for him for Christmas. '"YO!" I shouted. He looked up, quizzical and annoyed. The noise in the ceiling continued. I motioned with my right forearm for him to come to the kitchen. "What?" he asked loudly. "Come here!" I ordered in one of those half yell, half whispered voices that we all have used at some point in our lives. He finally saw my if-looks-could-kill look, and lowered his leg rest on his raise-'em-up chair and came hither.

The noise in the ceiling was such that even HE could hear it. He looked at me, then at the ceiling, then back at me. "What's is it?" he asked curiously. "It's the sound I have been telling you about for months now," I responded. "I guess I should check on it -- this weekend," he declared, and went back to his magazine. I decided not to hold my breath.

Cut to tonight. Our younger daughter was dutifully doing her homework in her bedroom, having eaten a lovely meal prepared by her loving stepmom. She came down complaining for the third night in a row that she was hearing something above her bedroom in the attic. "Must be our resident squirrel," I said. "That can't be a squirrel," said our 13 year-old. "It's moving suitcases around up there. It's a raccoon." "I don't think a raccoon could fit through the crack that we think the animal is getting in through," I challenged. "Well it's BIG, so I'm betting it's a raccoon!" she contested and, whipping her long blond locks around, went back upstairs to her homework.

About 45 minutes later, after older sister had gotten home from crew practice and eaten her left-over pasta, I was sitting in the living room working on a previous post on this blog. Hubby was absorbed in his magazine when I heard some sporadic rustlings in the kitchen. I called out to my older stepdaughter. No answer. She must have already gone downstairs to do her own homework. So, I crept around the corner to the kitchen. Seconds later, I heard a bunch of Irish dancers in the attic. At least that's what is sounded like. I hurriedly skittered back into the living room, and did the half whisper half yell voice up the stairs to my younger stepdaughter to come quickly. She whined back, "What are you gonna do to me?" "Nothing, just come," I responded. She came out of her room guardedly, and hugged the wall as she floated down the stairs.

In the dining room, she recognized the sound of her new friend in the ceiling. We gave each other the "OMG" look, and stepped back into the living room. Upon seeing our puzzled faces and inquiring into why we looked so mystified, Dad moseyed on up the 8 steps to the attic and pulled down the drop stairs. He went up into the shadows, lit by a couple of old-type Edison bulbs (we stocked up on them last year when it became clear that our nanny-state was robbing us of our freedom-of-light-bulb choice). I lumbered up into the attic behind him and tried to explain to him that the critter's last known location was over in the other part of the attic, over the dining room, not this area where he was crouched down looking. He listened, and then moved with deliberate intent down the stairs, headed toward our bedroom.

Before he could get out of sight, I hollered for him to give me the flashlight. He obliged. I planted myself on the floor and told him to raise the attic steps and turn off the lights. He did. It was surprisingly dark up there. Luckily it was not too cold. I thought of Clark W. Griswold on Christmas Vacation (the one and only movie that I can stand to watch Chevy Chase in after his disgraceful disparaging remarks about Sarah Palin). I wondered what I would do if the critter came out of nowhere with its nasty, big, pointy teeth (okay, I wandered off to Monty Python). I was imagining the gnarly scene that would occur in the darkness as I turned in slow motion to see IT trying to sneak across the attic floor...

"I see it!"" shouted my husband as the attic trap door yanked open and light flooded the attic. So much for my heroine-ship.

"In the other attic." he said.

"Oh yeah, it's just sitting in the corner," he informed me. I followed him into our bedroom.There, in his closet behind the row of dress shirts, he told me to open the little door that has a hook-latch on it, a 1 1/2 foot by 2 foot opening. Slowly, with flashlight in hand, I opened the door and shone the light inside. 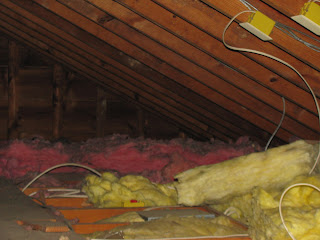 At first, there was nothing except colorful insulation.

Then, in the corner, large as life, was the critter. 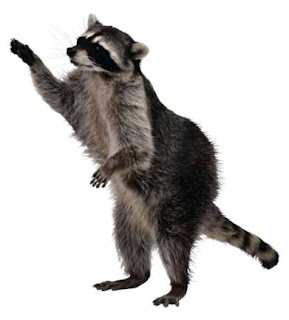 Well, he (it, she?) was not standing up like that, but it was undeniably a raccoon.I think my hubby thought it was gonna come charging at the door. "Close the door," he urged, so I did. When our teenage girls clamored to see, he let ME open the door and shine the light in for them. They had to strain to see, but both became eye witnesses to the encounter.

Minutes later I was on the phone with the County animal control folks. The young woman (who sounded as old as my second grade niece who texted me for 30 minutes tonight on her new I-phone touch) told me that she cannot climb into unfinished attics, and even if she could and if she could trap the varmint --my word, not hers--she would have to let it go right outside my house, and it would probably come right back in. So she gave me the name of someone I could call and pay to come remove the rascal.

You gotta love the free market. Where's my checkbook?
Posted by Informed Catholic Voter at 10:41 PM