Bill O'Reilly aficianados will recognize his moniker "Pinheads and Patriots." It came to mind today when two news items jump out at me. First was MISTER Obama. He has really stepped in this time. Of course the mainstream media will cover for him and try to explain away his meaning. It occurred at the end of his private conversation with Russia's outgoing president, Dimitri Medvedev. Unbeknownst to Obama, he was overheard and taped by media who were coming into the room for the public meeting. (It's a bit surprising that this was even released by the mainstream media gotta give credit to Jake Tapper, it seems.) The conversation was supposed to be "confidential," but what the two men said to each other should be very disturbing to all freedom-loving Americans. Indeed, it is borderline treasonous on the part of Obama, if not completely crossing the border into the land of selling-out-our-country.

From this conversation, it is clear that Obama thinks he has the November election locked up. He tells Medvedev that this is his final election and that afterwards he will have "more flexibility." Reading between the lines, this means, "I won't have to worry about re-election again so I will be able to do whatever I want with this country's missile defense system." Medvedev says he understands, and that he will pass that along to Putin, the newly-elected and former-President and current-premier of Russia.(Sounds almost incestuous!)

What is really creepy is the way Obama reaches over and puts his hand on the Russian's as he makes his soto voce remarks. Clearly Obama thinks that his touch can work miracles, and that he will persuade people by his charm. It looks like it is working here, as Medvedev is going to pass along Obama’s message to Putin. Pinhead is not a strong enough word for this. It needs to be made into a GOP campaign ad, along with pictures of Obama bowing to foreign leaders and selling out and weakening this great country repeatedly. I don’t know how this man sleeps at night….

[Update: Poland is VERY concerned about this tête-à-tête. Is Obama intending to abandon one of our oldest and strongest allies? Wait, that was an earlier blog... And some in Congress are demanding answers - finally!]

Speaking of sleeping at night--which I presume Mr. Obama does in the White House--the second story involves MISTRESS Obama and her use of the East Room of the White House as a gymnasium. This happened in February, but it is just now coming to light. Now, I have certainly been critical of Mrs. O in the past when it comes to her designer duds, and her ridiculous vegetable garden on the swampy sewer area (thanks to the Clintons) of the White House lawn, and her extravagantly expensive vacations on the taxpayers’ dime.

But this time I am willing to cut her some slack.

That’s because the invitees were the contestants from The Biggest Loser, which is one of the few shows that I watch on television. And also, trainer Dolvett Quince is a hottie, so I think he deserves the chance to lead some calisthenics in the Peoples’ House. 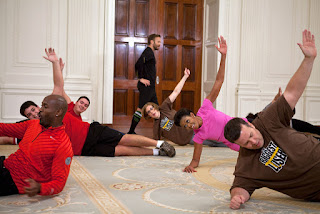 I know many of you will disagree with me. I am all for protecting the dignity of the White House. But I have to give kudos to Mrs. Obama for exercising with them - she's a Patriot in my book on this one. So, this is one White House event that I won’t lose any sleep over.

It’s MISTER Obama who should be losing sleep!!! He's the Pinhead!
Posted by Informed Catholic Voter at 8:26 PM