For the First Time in My Adult Life...

... I was not excited about the Fourth of July this year.

Why? Because earlier this week I was labeled a "terrorist" by my government. Because I love freedom and do not want a meddlesome nanny state telling me what light bulbs to use or that I have to buy something, I am a terrorist.

As I mentioned in an earlier blog, we were without electricity for about 18 hours last weekend. We were glad when the power came back on, but what did not come back on was our Internet and cable from Comcast. I was not able to go to work Monday and Tuesday because my office in Maryland did not have electricity. Staying home for two days was a welcome break after all that the last two weeks have brought. Even our Verizon five-spot also did not have connectivity, so there was no Internet availability either.

Although it was a bit strange, I adapted pretty readily to the lack of modernity. Having spent a week in Haiti where there was no electricity (other than solar powered lights at night) . . .

I spent my two days at home cleaning up from the weekend storm. We had a lot of broken branches in our back yard, but luckily no whole trees were lost. Here is what one section of the yard looked like on Sunday (7/1). 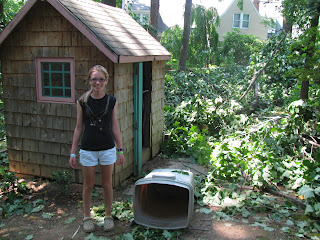 On Monday I took to the task of cleaning up. After I stripped off the smaller branches and twigs from the pieces that were too big to carry by myself, we were left with a more manageable scattering of limbs that we could carry to the cul de sac.


On Tuesday Hubby helped me cut up the larger pieces, and we finished the backyard cleanup by supper time. We are still waiting for the County to come and pick up the 5 piles that we carted up to the cul de sac and stacked neatly and compactly -- all from our yard.


When the holiday rolled around in the middle of the week, we were ready for a break. So what did Hubby and I do on the Fourth of July? We were not tempted in the least to go downtown to the D.C. fireworks. It was a mutual "been-there-done-that" decision. Instead, we took to the road to travel through rural Virginia to see the countryside -- and the remaining Americana that I hope will not be lost in the future. I worry about the hopey-changey liberals who are determined to destroy the America I love so dearly. A stretch, you might think? Not when you consider that the government is now sending out drones to spy on citizens in my neck of the woods -- northern Virginia!

We left Arlington around noon and drove out west into the foothills of the mountains, then headed north. We ended up stopping in Charles Town, WV, where there is a casino with horse racing and slots . . . and slots and slots and more slots . . . as far as the eye can see. (This building made the Evansville Casino Aztar riverboat look like a barbie doll casino!) I was surprised to see a simulcast of horse racing at Ellis Park -- which is located in my beloved hometown in Kentucky. There were people of all classes and status and walks of life playing slots and roulette and craps and cards. After walking around for a while and studying the intensity on the faces of the gamblers, Hubby and I got adventurous. We put a dollar into a 5-cent slot machine, and it was gone in about 10 pushes of the button -- lasting about 1 minute and 40 seconds.

After about an hour of spectating, we lumbered back to the van and said goodbye to Charles Town. Luckily, gambling is one vice that will never get a grip on me. I feel like I work too hard for my money to watch it get eaten up by the games of chance. I know the odds are not in my favor when it comes to such activities. I prefer a little better odds -- like the lottery!

So, as we come to the end of the work week, after 9 straight record-breaking days of temps in the high 90s, I look forward to sleeping in tomorrow and enjoying some R & R.