Which Came First: Chick-fil-a or the Bigots?

Yesterday this story was one of the news items that nearly made my head explode. I did not have time to post on it, however, and today I don't have write much about it either since Brent Bozell of the Media Research Center has done a terrific article on the matter. In fact, he even titled his article the same as I had titled my unposted blog: "War on Chicken."Before we get to what Brent has to say, let me just point out what I saw yesterday that made my blood boil.

First was an article about the pronouncements of Chicago Superbully-mayor Rahmbo Emmanuel. 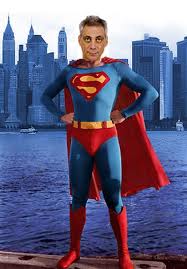 Rahmbo, who cannot (or will not) control the rampant crime in his own Windy City, decided he could control chickens. Yes, he "came out" yesterday as a chicken-hater. It's no coincidence that his sudden war on chickens erupted a few months after Obama stopped being a chicken and "came out" as a supporter of gay marriage. Rahmbo jumped head-first into the chicken fray yesterday, telling the fast-food restaurant Chick-fil-a that they are not welcome in a neighborhood in HIS Chicago where they are planning to build a restaurant.

What is Rahmbo's problem with Chick-fil-a? It's as simple as this: he does not want someone who thinks differently from him running a chicken business in Chicago. "Chick-fil-A's values are not Chicago values," said Superbully Rahmbo. "They're not respectful of our residents, our neighbors and our family members. And if you're gonna be part of the Chicago community, you should reflect Chicago values." Even the
über-liberal Atlantic magazine has come out blasting Emmanuel.So have other liberal icons like the ACLU and Mayor Bloomberg of New York.

[Intentional Digression: Superbully Emmanuel only accepts people who think like him and who reflect Chicago values, so that explains why he is welcoming anti-Semite, hate-mongering Nation of Islam leader Louis Farrakhan to help with the murder problem in Chicago. Apparently Farrakhan is no chicken.]

And if Rahmbo's anti-chicken rampage is not enough, along comes Superbully Junior, mayor of Boston Thomas Menino, who also is banning Chick-fil-a from opening a store in Boston. Yes, Boston, where our ancestors fought for the very freedoms that made us a great nation. The very city where the Tea partiers dumped British tea into the harbor in protest against an oppressive government that refused to give the people a voice. Here is what Superbully Junior had to say in his hate-filled letter to Chick-fil-a's president.

When I read that, I thought You have got to be kidding me. If this was not such a serious matter, I would laugh out loud at this absurdity from the mayors of two of the largest cities in America. This is further evidence of the war liberal politicians are waging on our Constitutional freedoms of speech and religion. Because Mr. Cathy dared to speak his heart (on more than one occasion -- gasp!) and state his own personal opposition to gay marriage, these politicians have decided to trample the Constitution and bully an entire corporation and the employees and the chicken-loving (and waffle-fries-loving) public.

The ridiculous and disturbing thing is that Barack Obama had the same anti-gay-marriage stance up until a couple of months ago, when it became politically expedient for him to admit he had "evolved" in his opinion. I don't recall Rahmbo ever telling Obama that he was not welcome in Chicago since, until recently, he did not "reflect Chicago values." So, clearly Rahmbo is a poultrist.

Mr. Cathy's personal opinion has nothing to do with the business. He does not prohibit his employees from serving gay persons. No one asks you if you are gay and married when you go in to order a chicken sandwich at Chick-fil-a. (I was just in one yesterday, so I would remember that if they did.) I did not see any signs of anti-gay "values" in the Silver Spring Chick-fil-a store. Indeed, the two guys holding hands in front of me in line ordered and were served in a timely manner. But then again, they were not wearing wedding rings, so I guess that's why they were not booted out.

The whole premise that a mayor or alderman can threaten--much less succeed--in imposing their own personal beliefs on an entire city and its businesses is chilling. Talk about trampling free speech. The actions of these superbullies has had a chilling effect on free speech. Mr. Cathy has made no secret that he is a religious, faith-filled man. After this though, regardless of how it plays out, I have to wonder what business owner in his/her right mind will ever profess a belief in traditional faith-based principles ever again? And that is just what the superbullies want. Add war-on -business to the growing list of liberal agenda items.

Then, as if political superbullies are not enough, you have the Hollywood superstarbullies adding their self-important "stardom" to the fray. This is where we come back to Brent Bozell, who wrote this about the Hollywood ninnies and their insertion of themselves into the fray, via Twitter.


Other critics emerged on Twitter. "Chick-fil-A doesn't like gay people? So lame," actor Ed Helms (of "The Hangover" movies) tweeted. "Hate to think what they do to the gay chickens! Lost a loyal fan." Several other bold-type Hollywood moralists — Miley Cyrus, Lindsay Lohan and Kim Kardashian — also backed a Chick-fil-A boycott.

But few can compare with the undiluted spite of Roseanne Barr, who grabbed all the attention with her death wishes on Twitter: "anyone who eats S—t Fil-A deserves to get the cancer that is sure to come from eating antibiotic filled tortured chickens 4Christ."

This came after she had called them "chick filet- nazi chicken f—-ing pricks." She also cracked she was "off to grab a s—it fil-A sandwich on my way to worshipping Christ, supporting Aipac and war in Iran." When people attacked her for saying people "deserved" cancer, she lectured, "Giving (your kids) Cancer from processed fast food is child abuse." To think that this genius just tried to run for president of the United States on the Green Party ticket is mind-boggling. 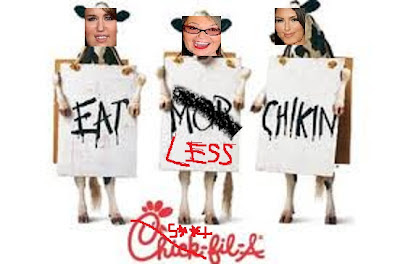 What's that? Roseanne apologized for tweeting that people who eat Chick-fil-a deserve to die from cancer? Ohhh, okay. I guess I should apologize for putting her face on a cow. Here goes: "Sorry, cow, for putting Roseanne's face on you." That goes for Miley Cowrus and Kim Kowdashian, too.