Don't You Hate It When Your Head Explodes?

OMG there is so much blog fodder this morning I think my head is going to explode!

“Exploding head syndrome is a phenomenon or condition in which the sufferer sometimes experiences a sudden loud noise coming from within their own head. The noise is brief and is usually likened to an explosion, roar, gunshot, loud voices or screams, a ringing noise, or the sound of electrical arcing (buzzing).” via Exploding head syndrome – Wikipedia.

So, to start with,  it seems on Tuesday of this week Obama scheduled an unscheduled meeting with three vets in a diner in Portland, Oregon. Apparently one of the guys was named "Marv." A press pool member interviewed Marv before the President arrived and wrote:


Diligent co-pooler Laura Meckler had just interviewed Marv before the encounter. Her readout: Marv Self said he came to the diner to kill some time and avoid the backed up freeway jam caused by the motorcade, never expecting POTUS to show up there. He said he is undecided on the election. 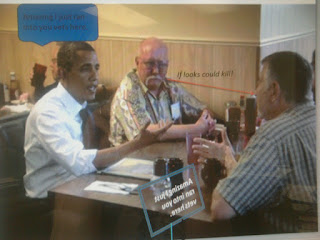 Only the press pool quickly figured out that this stop was not so "unscheduled" when the Obama campaign staff handed out to the press pool printed bios on the three vets who just happened to be at the restaurant where Obama just happened to stop. It also turns out the three vets all have a history as Obama supporters. We should expect nothing less. I'm sure Obama learned how well he is doing from the vets, and he will now surge in the polls among American veterans. As one local reporter put it, "In addition, the local vets -- Thomas Foeller of Oak Grove and Mark Peterson and Dean Dilley, both of Portland -- are retired white males, a demographic the Obama campaign would certainly like to do better with."

NOTE TO READERS:
I have to finish this entry, as the blog is acting up, and I don't have time at this sitting to add more. The blog-site locked up, would not respond, then published an unfinished version of this post. So I will have to work on it later.