All Creatures Great and Small

It's Saturday morning, my favorite time of the week. I like sleeping in late, and rising on Saturday morning knowing that I have the full day ahead of me, and that tomorrow I do not have to go to work either. This morning our 13-y.o. cooked breakfast -- chocolate chip pancakes. She volunteered, so who was I to deny her the chance to develop her culinary skills. She did a fine job, adding a dollop of cool whip and a strawberry slice to complete the exquisite presentation. I think she would have made it the dessert round on Chopped! 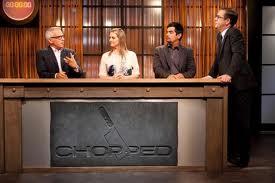 Saturdays are for enjoying the beauties of nature. Our backyard has come back to life after last weekend's storm. It looks a lot different now than it did a week ago, thank goodness. 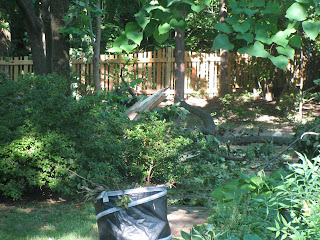 Earlier in the week I put out two bird feeders. In my infinite wisdom I hung them from a double hook pole so that the squirrels could not get to them the way they have in the past when I hung them from trees or fences. 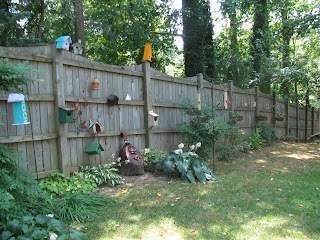 Can you see the bird feeders -- slightly to the right of center -- long cylindrical hanging feeders? No? Let me zoom in for you then . . . 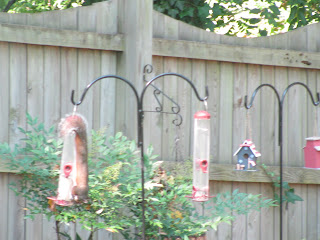 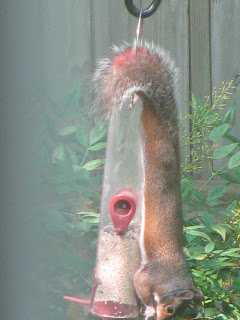 One crazy squirrel managed to get to the bird seed despite it being suspended from a metal pole! He was using his tail to hang upside down and scarf down the bird seed. So, problem-solver that I am (or want to be), I decided that he must have jumped from the fence onto the feeder since squirrels cannot climb skinny metal poles. Solution? Move the pole away from anything that the critter could use to launch himself onto it. So that is precisely what I did, moving the contraption just a few feet away into the yard.


Then, the entertainment began. Never again will I think that I have outsmarted the small creatures. They are adept little buggers when they want something.


Yes, they can outwit me, but not Hubby. A little WD-40 and problem solved.

Of course, I thought the same thing -- problem solved -- about another of God's small four-legged mammals a couple of months ago. Then last week, a couple of nights before the storm hit, I was standing at the kitchen sink filling a water bottle when something caught my attention out of the corner of my eye. Movement on the deck. I directed my gaze to the door leading outside. To my amazement, ambling by without any hurry was a familiar figure. It was Rocky the Raccoon.

Or, more accurately, it was Rockette. Following her was not one, not two, not three, but four smaller clones of the raccoon. They were heading toward the steps that lead down to the side of the house. After shouting "Oh, oh, oh!" I ran to the front door, motioning for Hubby to come along. "What is it?" he queried as I darted around the front of the house to the side, intending to sneak up on them as the came down the walkway. Instead, several of the baby varmints scurried around the fish pond when they saw me, and squeezed through the chain-link fence into the neighbors' yard. I signaled for Hubby to back around the house to the deck, and whispered loudly, "Get my camera!"

As I approached the back of the house, I stopped at the low fence made of trellised wood that we had put up a few days before to keep the dogs in the back yard. Sensing that I was being watched, I looked to my left on the ground by the corner of the house, and there sat one of the baby raccoons. He was still as a stuffed animal, looking up at me as if he was hoping I did not see him. I said, "You better be afraid, little fella. I'm gonna get you." Rather than be afraid, he rose up slowly and crept toward my feet, as I was standing between him and his escape route around the fish pond. I thought him brave, so I waved him on, and he scampered away and through the fence to freedom.

Why would the mother leave him behind? I thought. Then my question was answered. With my attention drawn to the deck by the appearance of Hubby inside the house at the door to the deck, I spotted her. She was still up on the deck, standing like a statue beside a flower pot. She was watching me as I watched her. She had not abandoned her youngsters. She had sent them ahead of her and had stayed back to bring up the rear. But they had gotten separated as a result of my sudden intervention.

I slowly stepped over the fence and approached the steps. Mama Rockette stepped back a step. Just then, Hubby opened the door leading to the deck and stepped out. Mama was off like a rocket, heading for the steps on the other side of the deck. Her only choice was to go under the deck if she hoped to get to her babies. Hubby handed me the camera and followed Rockette down the steps. I went back down the steps I had climbed, rounded the side, and ducked beneath the edge of the deck. Rockette and I were face to face. Sort of. There was a stack of tomato fences laying in between us. Snap! I caught her on film. 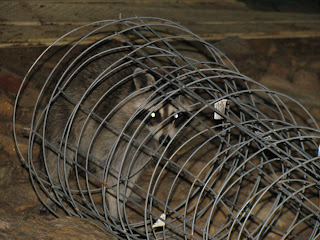 It was her! The same creature from our attic back in March. I would know that face anywhere. She could not disguise herself.

I wanted to stay around and have it out with Rockette. However, Hubby and I had been on our way out the door, which is why I was filling the water bottle, when I had seen the parade of raccoons on my deck. So, I had no choice but to abandon the chase. As soon as I left the underside of the deck and climbed the steps to the top again, Mama raccoon skittered from under the deck to the fence, tried to climb over the dog fence, and promptly knocked it to the ground under her ample weight. She fled into the brush by the fish pond, and how she got to the other side is a mystery to me. But she somehow managed.

Although I have not seen Rockette in the last 10 days, I sense she has not been deterred from invading our yard. The doggy fence was knocked down again a couple of days later, so I jammed it between the chain-link fence and a tree on one end, and the drain spout and brick wall on the other. It will take something larger than Rockette to knock it over now. I just hope there is no daddy Rocky planning to join the crew.

Email ThisBlogThis!Share to TwitterShare to FacebookShare to Pinterest
Labels: Chopped, pancakes, Rockette, Rocky the Raccoon, Saturday is my favorite, WD-40