I was out of town on business for most of this past week. When I arrived back in Virginia last night, I felt a sense of relief to finally be back home. I like sleeping in my own bed and having familiar things around me.

It was still light outside when my husband picked me up at Dulles Airport, but it was dark by the time we got home. I still could not resist taking a walk through our yard so I could see how things had changed over the six days that I was gone. We used a flashlight so I could see the beautiful flowers that have bloomed. I was amazed at the changes that have occurred. (I will post pictures tomorrow.)

I slept well last night and did not rush to get up this morning. By the time I did climb out of bed, Hubby had already gone downstairs to make coffee and pancakes. He is so good to me!

Our first task of the day was to pick up my silver Corolla from the body shop. Did I write about how that came about? I don't think so. Maybe I will -- once I get my blue Corolla back from the body shop. Have I peaked your interest? I will write that story soon....

But back to last night and the drive home from the airport. Our seventeen-year-old called while we were en route, and I laughingly asked her what was so urgent she could not wait 20 minutes for us to get home. She said, "Guess who's coming to my school to speak next Friday." It only took me one guess: "His Eminence Barack Obama?" She affirmed my guess. The only reason I knew was that I had read earlier in the week while in Chicago that BO was going to be appearing at Washington and Lee public high school here in Arlington on Friday. And why would he not try to get in good with the Catholics by visiting a Catholic high school also?

So what is Obama saying to high school youth? He is now trying to divide the country's young people by rallying them to his side in blaming Republicans. Obama claims Republicans do not want young people to go to college, or that they want young people to be saddled with massive debt by letting rates on loans return to the levels they were at a few years ago. In reality, Republicans merely will not to go along with Obama's terms for extending a reduced interest rate on student loans for paying for college.

According to one article, Obama said to HIGH SCHOOL students: "I want you to send a message to Congress. Tell them, 'Don't double my rate.' You should call them, you should e-mail them, write on their Facebook page, tweet them."I can tell you that if my child were at school and Obama came in telling them what to do, I would raise holy heck. He has no business telling students what to do. Only their parents should be in the position to counsel them on such matters. The majority of them are minors, so this man is usurping the rights of parents by presuming to tell kids to write to Congress.

It is untenable for him to inject himself into what is the parents' purview. It makes be think of Pink Floyd's song, "Hey, Teacher! Leave them kids alone!"


Not only does Obama campaign illegally on the taxpayers' dime, but he has the audacity to tell students what they should do regarding a politically charged issue. And we taxpayers basically have to bend over and take it. My tax dollars are going into Washington and Lee High School. It infuriates me that he can campaign there using my money, but the candidate of my choice will never be given that luxury.

Obama told students that those who borrow to pay for college will graduate with an average debt of about $25,000 after four years. He made it sound like that amount is astronomical. Yet his wife can spend 20 times that much in five days, and that is viewed by the mainstream media to be a pittance. Let's see: $25,000 for four years of education versus $500,000 for five days of fun and shopping.... So just who is out of touch with what is hurting the U.S taxpayer?

The only redeeming thing that Obama did this week was to honor the Kentucky Wildcats at the White House for winning the NCAA tournament. 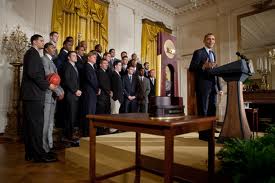 Even then he made it all about HIM, tossing around a basketball and fumbling his way through his garbled explanation of why he did NOT choose them to win the tournament when he made his predictions for the fourth year. 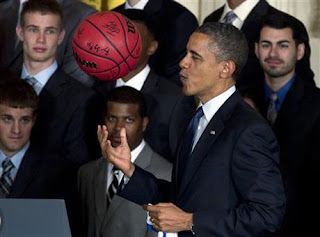 When you watch the video or look at photos of the event notice that there is not a sense of joy on the faces of the team's players as they stand behind Obama. Some look a bit tortured. Not surprising,y, this ceremony was held quite fast after the championship event compared to how long it has taken him to honor some sports teams that win their national championships. Obama loves basketball, and he was probably eager to hold the event to try and boost his image during this time when his popularity is waning, even abroad.

Even today, Obama failed to fill the stadium in Ohio where he officially kicked off his re-election campaign. 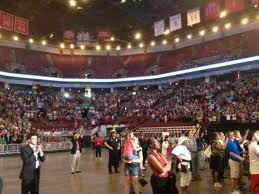 Notice the empty upper deck and empty spots in the seating sections. Word is they moved people to the floor to try to make it look full. And his new campaign slogan, "Forward," is noted to have historical ties to socialist and Marxist periods and people of that persuasion. 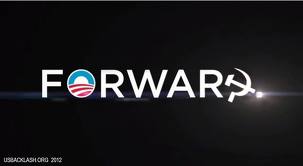 It makes sense, since "Progressives" do want to move forward unhindered with their socialist agenda. But we are not going to let that happen. Come November, we send Obama back toward his Chicago roots.