Those Precious Little Ones!

My mom has 11 children. Between us we have given her 21 grandkids, 2 step-grandkids, and one grandchild on the way. That's a total of 24.

A Knoxville man has 11 baby mamas. Between them they have given him 30 children. That's a total of 30 children! He wants to take a break from paying child support. Apparently $1.49 per month in child support is draining his coffers.


As the video points out, the law cannot do anything to this man because he has not broken any laws. There is no comment about his parenting skills.

Now, speaking of parenting skills, have a gander at this video that has gone viral. This is Anytown, U.S.A., and these parents are simply doing their laundry at the laundromat.


Yowza! That poor kid must have been dizzy. Luckily, he was not permanently harmed, at least not outwardly. He will grow up with a phobia of laundromats.

Sooooo, taking care of little ones is a challenge. That was confirmed for me today. I cleaned the living space of my little ones, and then, out of sheer negligence for their well-being, I killed them. Yes, all of them. Their innocent, lifeless bodies are floating in a tub outside.

I had 11 goldfish. Between them they produced countless offspring. That's a total of an unknown number. Their demise really was not intentional, but I should have known better. Darn that chlorine!

These are our REAL "little ones." They grow up fast! 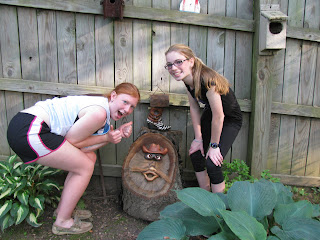