Mor-an More It Appears Virginians Have Been Had

So this is a perfect story for Catholic voters to be informed about and to learn from.
Back in October, days before the nation-wide election, Virginia Congressman Jim Moran's son, Patrick, was caught on tape being receptive to voter fraud. He laughed at the proposed scheme and told an undercover pretend-liberal how to fake documents in order to vote illegally for dozens of people. The fake liberal explained that his helpers were going to pretend to be these voters so they could vote for Obama. Sonny Moran was campaign manager for Daddy's campaign in the Northern Virginia area. When the news broke, Daddy Moran explained away his son's crimes, and the voters in northern Virginia bought the lies. They re-elected the enabling Daddy Moran to Congress over an Army veteran with impeccable credentials.

Today a story appeared in a local Arlington paper/website that Sonny Moran beat up his girlfriend outside a D.C. bar a few nights ago. Yes, the big bad baby Moran smashed his girlfriend's face into a metal trash can. What a man! He beat up a defenseless woman. What father wouldn't be proud? So what was his Congressman father's response?

“Patrick and Kelly are both good kids and I hope their privacy will be respected,” Rep. Moran said in a brief statement. “They look forward to putting this embarrassing situation behind them.”

Really? Embarrassing? Does one plead guilty to assault, amended down from felony domestic violence (which Son Moran did today) simply because it is embarrassing?

Me thinks this should be labelled for what it is: a "war on women..."

I guess the old saying really is true: The apple doesn't fall far from the tree...

NOTE: True to form, the girlfriend released a statement saying the police report was wrong, that she accidently fell into the trash can. Ahhhh, so that's why young Moron pled guilty to assault. Makes sense. Won't be surprising when he beats the living daylights out of her next time. That will be really embarrassing! Here's a screenshot of the D.C. Superior Court record. 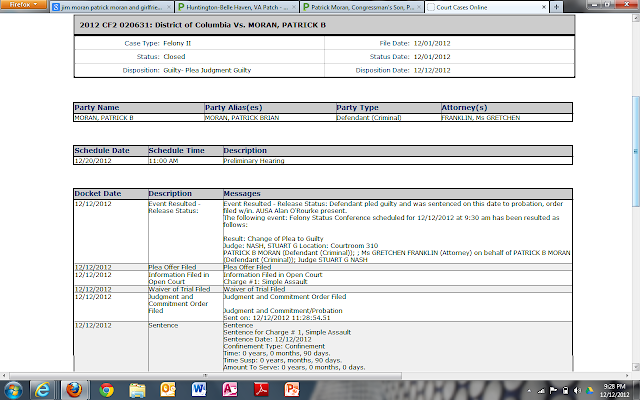 What does not show up at the bottom is that the sentence was 90 days suspended (translated no jail time), 50 hours of community service (probably registering people to vote), and $50. That last one should really set him back. He has until January 13 to pay it from the allowance Daddy gives him.