Iben Browning, Y2K, the Mayan Calendar, and the God Who Loves Us

In every generation there are tales of the coming of end times, of Armageddon, and of the demise of life as we know it. Some predictions are more more memorable than others.

Recently I was reminded of the events of twenty-one years ago, in early December 1991. I was a much younger 30-year-old elementary school teacher back then, and I recall vividly the hype that grew to overwhelming decibels over the prediction by a man named Iben Browing that a monumental earthquake was going to strike the New Madrid fault that runs along the Mississippi River between Missouri on one side and Indiana, Kentucky and Tennessee on the other. So adamant and persistent was Browning in his prediction that our classrooms in the Catholic school where I taught stockpiled water and other essentials. Then on the days that he pinpointed --December 2 and 3-- we got out of school because the public schools closed on those days. No joke.Nothing happened, naturally, but the "better safe than sorry" crowd prevailed.

Then came the Y2K about 8 years later. It was predicted that the change over to 2000 would disrupt everything--from finances to life-sustaining medical equipment, to such a degree that the world was in danger of exploding at the stroke of midnight going into January 1, 2000. Never mind that there are 24 time-zones and not everyone enters the new year at the same time. We were told that our existence was so intertwined that computers would crash and we would be lucky to survive. Again, nothing happened, and everyone that I know lived to tell about it. 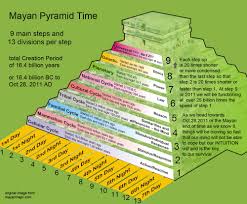 A similar phenomenon is happening now. I had heard about it but had read nothing about it in recent weeks. Then this morning the cleaning lady in the building where I work was at the coffee pot very early. We were the only ones in the building. That's when she generally does her work. She is from Mexico, and spoke no English when I first met her almost 7 years ago. Now she has mastered the basics of the English language quite admirably. We were speaking about Christmas and the coming break when she interjected,  "I scared. Bad things going happen. You hear about this?" At first I was confused, then I realized she was referring to the prediction that this is the end of times since the Mayan calendar has come to an end.

"Yeeeeees," she said, eyes wide as she nodded her head affirmatively. "We could die."

I smiled a bit and assured her, "I think God would not let us die in a blast. I think he loves us too much to let the world go 'BOOM.'" I emphasized the BOOM with sound effects and spreading my arms wide.

She smiled too, and said, "Yeah, I think so, too. But I still scared."

The end is supposed to come at sunrise on December 21, which is Friday. Tomorrow our cleaning lady is treating the folks who work in our building to pizza. So I told her, "Well if it happens at least we will die with our stomachs full from your pizza!"

She chuckled out loud and said, "Yeah. I better make it pizza with the works!'

I thank God for giving both of us a sense of humor amid all this craziness.