Last night brought such welcome news with the victory of Scott Walker in Wisconsin. I had talked with some folks from Madison earlier in the day yesterday, and they were geared up for the recall to be implemented so their guy, Barrett, would be installed as the new governor. I could not tell them that I was cheering against that. But I was hopeful that the people of Wisconsin were smart enough to not be taken in by the union thuggery that has gripped that state for over a year now.

I was glued to both the television and the computer watching the precinct results begin to tally up beginning at 9:00 Eastern time. Fox News Channel made the call before 10:00, with about 25% of the precincts having reported. The "too-close-to-call" race was, in reality, a blow out!

It was so comforting and inspiring and satisfying to see the union-backed progressives crash and burn. The image that will stay with me is this one from CNN right after the race was called by that so-called news channel.

The White House has to be shaking in its boots!!! This is a harbinger of what is to come in November. Conservatives nationwide are fired up, and we are ready to take down the big kahuna. The Tea Party lives! The Romney victory in November will be as monumental as the toppling of another regime a few years ago. 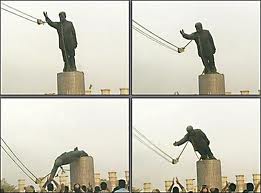