Last night I posted an entry about Mia Love, the amazing young politician from Utah who wowed the crowd at the Republican National Convention with her patriotic speech. Naturally, the haters on the left could not stand it that a lovely, patriotic, black female Republican was speaking the truth and denouncing their hateful ways. So what did some of these leftist haters do? They went to the Wikipedia entry on Mia and called her a "whore" and an "Aunt Tom."  They called her a "House Nigger and a "dirty worthless whore." Rather than a love-hate attitude, these despicable leftists have a hate-Love attitude.

It's no wonder we are seeing this hate-mongering coming from liberals when you read what has been coming out from Hollywood celebrities and Democrat politicians lately. People like Ellen Barkin and Samuel L Jackson and Cher and Roseanne Barr and Jean Smart and Maxine Waters and other no-name-libs-who-think-they're-funny have given license to others to mimic them as they go off on hate-filled rants against conservatives. And don't get me started on the left-wing media personalities like the despicable Chris Matthews. 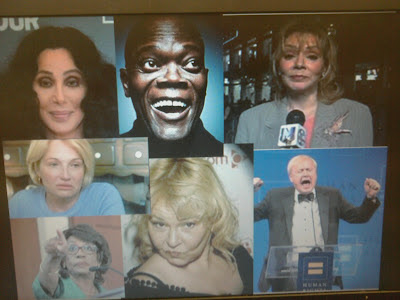 And we wonder why there is no bi-partisanship in this country any longer. I am nauseated by the left's hatred. I will never sacrifice my values or my beliefs to "get along" with those who spew vile hatred to pump up their own images. I am beginning to think seriously that dividing the country is the only solution.

Our only hope for saving the Union is getting rid of Obama in November. Even then, the hatred between liberals and conservatives has grown so much and so deep in the last four years that we may be irreconcilable. We may be failing the test that Benjamin Franklin predicted in 1787, when asked by a woman what form of government the Constitutional Convention had come up with. Franklin replied, "A republic, Madam if you can keep it."

I pray it's not too late and that we have not lost the Republic.