Simone Campbell, a Catholic nun who heads up a radical feminist lobbying group called Network, has finally parked her bus... 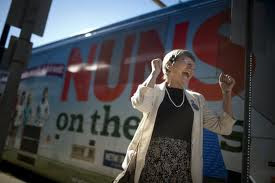 .. for now. But I am sure she will gas it back up at some point, perhaps with a new equally liberal purpose, whenever she needs another shot of adulation to lift her above anonymity.

Campbell and her radical sister nuns (redundant - radical and nun?), standing with Barack Obama, won the Obattle. But they definitely have not yet won the war.

Speaking of wars, or at least battles, S.E. Cupp really gave Campbell a hard-hitting jab or two recently on an MSNBC program. Cupp is one of the first conservatives to challenge Campbell and call her bluff.

Notice how Campbell evaded the real issues and merely spouted her well-rehearsed talking points about the duty of the government to support the poor  and the non-existent right of poor people to have the government pay for their food while they have unlimited sex and 15 kids and/or buy iPads and Nike Air Force I shoes (up to $2500 a pair) and steaks and  multiple lobsters with food stamps.

But who am I--a mere taxpayer who involuntarily gives only 29% of my income on federal and state taxes alone, not to mention what they take from my husband--to stick my nose into what these welfare recipients do with my tax dollars once liberals like Campbell (who essentially pays no taxes since she gives her income to her tax-exempt religious order and then gets taken care of with tax-free dollars) decide that these folks should be free to spend my tax dollars that the government gives them ANY WAY THEY WANT. It makes them happy, and they have a right to the "pursuit of happiness" because it is guaranteed by the Constitution. So shut up and pay what we Democrats tell you to.

Campbell has become the liberals' favorite Catholic since she tows the Democrat party line behind her nuns-on-the-bus bus. Liberals pundits invite her on their programs whenever they need to try to bolster their (and Obama's) atheistic, unethical, anti-religious, and/or anti-Catholic viewpoints. They count on Campbell to spew forth anti-Bishop, anti-Pope, anti-priest, anti-Church, anti-American, anti-white-male, and pro-anything-goes rhetoric, all in the name of "social justice." Here are a few examples of Campbell in her well rehearsed and polished televised "worship-me" poses. 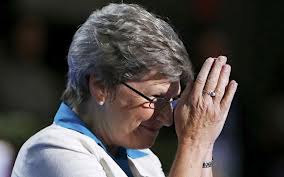 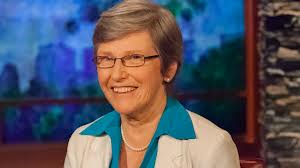 If you Google her name, you will find lots more... 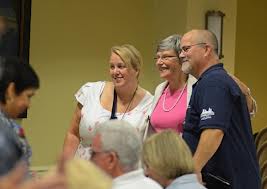 Indeed, the latest example of Campbell being invited to a high-profile meeting was yesterday, when she was a guest at the White House (funny how she gets praised for being invited to the WH, but Jill Kelley gets called a social climber and other derogatory names for getting invited there three times in three months by Obama's LAWYER- but that is a whole different story.... or is it?). Campbell was there with Al Sharpton, AARP's leader, and other "civil rights leaders" whom Obama invited to the White House to discuss our nation rapidly approaching the fiscal cliff.

Now, Campbell is a lawyer, but then so am I. I am not a money guru. Neither is she, so what on God's green earth qualifies Simone Campbell to give advice to the President of the United States on fiscal matters? I know, I know, that is not why Obama invited her to be there and to speak. No, he wants her name, her clout, her Catholic anti-Catholic viewpoint -- and the support of all the adoring nuns and other clueless sheep who follow her -- and thus him. Indeed, she will deliver that. Many nuns think Campbell hung the moon. On Friday she was there as part of Obama's photo op. He uses her the way she uses her fellow nuns. I guess there's some truth to the old misery-loves-company adage.